Airbus Helicopters has moved a step closer to the first flight of its Racer high-speed rotorcraft, having achieved power-on of the technology demonstrator.

Disclosing the milestone via Twitter on 20 December, the manufacturer posted a short video clip showing the Racer largely complete, sporting its distinctive V-wings, H-shaped vertical tail and pusher propellers. However, it is still lacking its main rotor. 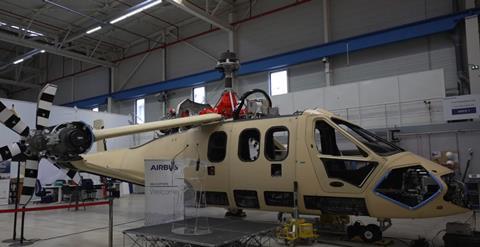 In November, Airbus Helicopters revealed that the rotorcraft’s maiden sortie had slipped to 2023, from a previous target of 2022, thanks to the late delivery of undisclosed components.

Developed as part of the EU-funded Clean Sky 2 programme, the Racer’s compound architecture builds on the airframer’s earlier X3 design and should allow it to achieve a cruise speed of 220kt (407km/h).

In addition, one of its twin Safran Helicopter Engines Aneto-1X turboshafts will be able to be idled and rapidly restarted during the cruise, contributing a 15% fuel-burn reduction while at 180kt.