Airbus Helicopters is to institute a series of modifications on the H145 that will increase the payload of the light-twin by 150kg (330lb).

Key to the upgrade is a new bearingless five-blade main rotor – the first commercial application of technology tested on the manufacturer's H135-based Bluecopter environmental demonstrator.

The improved rotor – which gains an additional blade over the current iteration – helps lift maximum take-off weight by 100kg, to 3.8t.

Although the extra blade adds weight, savings elsewhere enabled by its performance result in a net reduction of the helicopter's empty weight by 50kg.

The removal of the rotor head saves 53kg alone, while the lower vibration levels from the new design also enable two damping systems to be taken off: the light anti-vibration system which sits below the floor, and four cross-tube mounted 3hz dampers. These changes save 28kg and 60kg, respectively.

"It shows that during the last decade technology has evolved and research has enabled us to certify this lighter-weight design," says Axel Humpert, head of the H145 programme.

That design leans heavily on the rotor system of the H135. The blades no longer attach to a rotor head, but are mounted straight onto the mast and feature the latest aerofoil design.

In addition, the new blades are shorter than those on the current model, cutting rotor diameter by 20cm (7.8in), to 10.8m.

Aerodynamic improvements have also enabled drag to be kept to the same level as the four-bladed version, says Humpert.

Initial trials of the Bluecopter took place in 2015, with the same rotor design then transferred to the H145 in 2017.

"We tested it and the results were so positive that we ran the business case and it showed that we could achieve this goal with simple modifications," says Humpert.

Blade folding has also been simplified. The new design is essentially a two-piece blade, with the 1m-long inner portion – the "cuff" containing a flex-beam – attached to the outer part by a single bolt. Once that is removed the blades can fold, reducing the overall width of the helicopter to about that of the horizontal stabiliser.

European certification is targeted for the first quarter of 2020, says Humpert, with US approval following three months later. By mid-February Airbus Helicopters had accumulated around 20h with its single test aircraft (D-HADW), or around 35-40% of the total required. 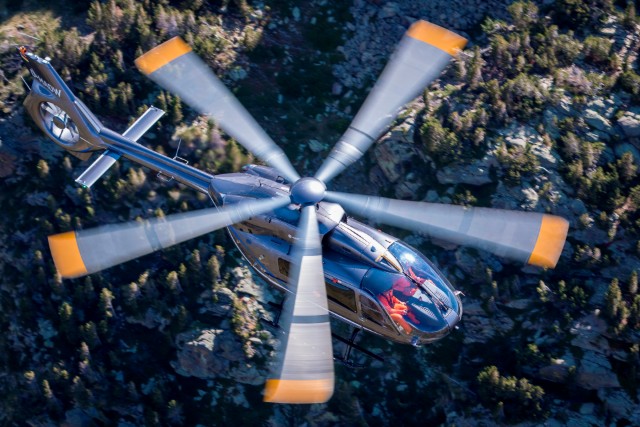 Three test campaigns have so far been conducted, in Spain and southern France last year, with cold weather trials completed in Finland in 2019. Flight evaluations are expected to run until around October.

Other tweaks include retuning of the crossbeam and horizontal stabiliser to avoid any dynamic responses, plus the addition of an elctro-hydraulic actuator to allow the pilot to more effectively check the rotor controls without the engine running, particularly in subzero conditions.

Prices will be kept at the same level as the current model, says Humpert: "We want to keep the competitiveness of the aircraft."

The upgrade will also be retrofitable to the existing H145 fleet, although not to older versions of the predecessor EC145, such as the C1 or C2 variants.

Although such a modification was considered, says Humpert, the limiting performance factors are the tail rotor and engines, rather than the main rotor.

Development activities on the new five-blade design began last year with the signature of a memorandum of understanding between Airbus Helicopters and Kawasaki, its long-term partner on the H145 since its initial guise as the BK117.

Workshare on the new variant – which for certification purposes will be the BK117 D3 – will remain broadly similar, says Humpert. Kawasaki will continue to produce the centre fuselage and main gearbox, along with several other systems, but for manufacturing simplicity will now also build the rotor mast.

Humpert expects production of the existing D2 model to continue until 2020, depending on demand.