Boeing says the health of the US AH-64E production line is an important consideration for militaries who are considering upgrading their legacy AH-64Ds.

Randy Rotte heads Boeing defence sales in Asia-Pacific and India. He notes that AH-64D operators are considering upgrading legacy AH-64Ds to the ‘E’ standard, and that “at least a couple” of countries in the region are thinking about boosting their Apache fleets. 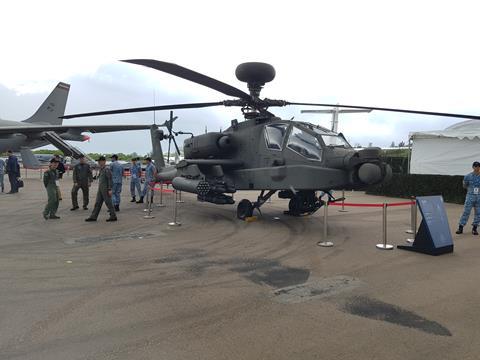 He says the USA’s decision to embark on a multi-year buy of AH-64Es should be a key factor for AH-64D upgrades. In July 2019, Boeing secured a deal to produce or remanufacture up to 600 US Army AH-64s to the ‘E’ standard.

Speaking about helicopter upgrades in general, Rotte stresses that there is no one-size-fits-all owing to different use patterns and helicopter configurations around the region.

“Each country has their own configurations based off of their requirements and unique situation,” says Rotte.

“When you start talking about [additional aircraft or upgrades], certainly we work with the US government and directly with those countries to help them find that perfectly balanced solution, between the capabilities they need, the timeframe to deliver them and the cost of those… we are working that across the region.”

The ‘E’ variant also includes the ability to pair with unmanned air vehicles.