AgustaWestland appears to be days away from delivering the first UK-assembled AW189 configured for search and rescue operations.

Destined for operator Bristow Helicopters as part of its new UK SAR operation, all 11 AW189s for use on the contract were due to have been built at the manufacturer’s Yeovil facility in the southwest of England.

Development and certification delays meant that the initial example, which was handed over in late 2014 and is currently being used for training at Bristow’s Norwich base, was fully assembled in Italy.

However, the first UK-built model is “ready for customer acceptance” says the airframer which will take place “in the coming days”.

Late delivery of the helicopters has led Bristow to opt for Sikorsky S-92s as a contingency plan instead of the AW189s at Inverness, one of two bases to go live on the UK SAR contract on 1 April.

AgustaWestland has seven of the eventual 10 aircraft on the production line, it says. Another two examples, also to be completed in Yeovil, were recently ordered by US firm AAR Airlift, for use on its SAR contract covering the Falkland Islands. 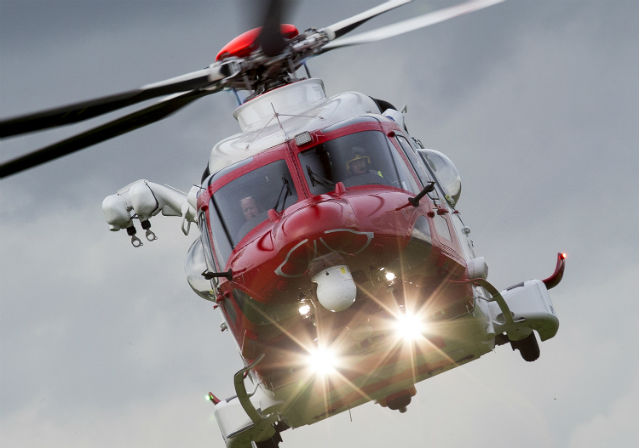 AgustaWestland continues to pursue other opportunities for the 8.6t SAR variant of the AW189, with a requirement from Hong Kong’s Government Flying Service to replace its older Airbus Helicopters’ types high on its priority list.

In addition, the Anglo-Italian airframer is to offer the higher gross weight variant to the wider oil and gas market. It gains an extra 300kg of payload over the baseline helicopter and features an additional belly fuel tank.

“The fuel system has been certificated by EASA, so if another operator wants to pick it up for offshore work where they need extended range, then it’s available,” it says.

The manufacturer has, meanwhile, played down a problem affecting AW189s operated by Bristow on oil and gas missions.

Cracking of internal panels in the cabin led to the helicopters being temporarily removed from service in early March while the affected parts were replaced.