Egypt is quietly building up its fleet of Leonardo Helicopters AW149s, having now taken delivery of five of an eventual 24 of the super-medium-twins from a 2019 order worth €871 million ($1 billion).

Leonardo has never commented on any aspect of the deal – or indeed acknowledged its existence. However, the commitment, which also includes eight AW189s, was disclosed by the Italian government in May last year. 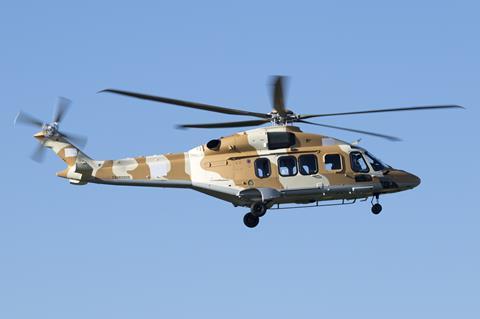 The most recent shipments took place in late 2020 when a pair of the 8.6t utility helicopters were shipped to Egypt via freighter from Milan Malpensa airport to Alexandria Borg El Arab.

An initial trio of the 8.6t helicopters was handed over in September 2020, Cirium fleets data records.

Since the AW149’s launch in the mid-2000s, the airframer has struggled to attract customers for the platform. Aside from Egypt, its only other order is from the Royal Thai Army, which has five examples in service.