Airbus Helicopters handed over at Farnborough this morning the latest H125 light-single to Qinetiq for operation on behalf of the UK Empire Test Pilots' School.

Qinetiq is undertaking a sweeping modernisation of the ETPS fleet, with a total investment of £85 million ($112 million) across fixed- and rotary-wing types.

Presenting the helicopter (G-ETPG), Colin James, managing director of Airbus Helicopters UK, said it was "fitting" that the handover was taking place at Farnborough, "which was for two decades the home of ETPS", prior to its return to Boscombe Down, in Wiltshire in the late 1960s.

Nick Anderson, managing director of air and space at Qinetiq, describes the H125 as a "really high-quality aircraft", which has been "tailored to the requirements of ETPS". 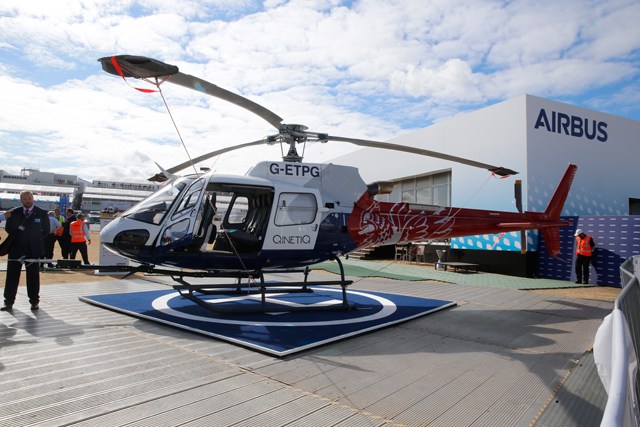 "It will really enable our rotary-wing pilots to train for the 21st century," he says. Training activities using the new fleet will begin in January 2019.

In total, ETPS will take four H125s to replace its elderly fleet of Aérospatiale Gazelles. Although they roll off the production line as standard commercial helicopters, ETPS requires a number of modifications for the training operation, including the addition of a Garmin G500H glass cockpit and three-axis autopilot.

Nick Lay, operations director at Qinetiq responsible for the transformation of ETPS, says the single-engined H125 was selected partly for its performance, as well as its low running costs.

"It is a highly agile helicopter while also having the operating costs of a civil helicopter," he says.

In addition, it also enables the provision of courses for civil pilots, he adds.

Of the four units on order, the initial example is being used by Airbus Helicopters to support supplementary certification flight testing. Two – including the aircraft displayed at Farnborough – are still receiving modifications, while the final rotorcraft is at ETPS's Boscombe Down facility for type conversion activities.