The Naval Air Systems Command (NAVAIR), of Pautuxent River, Maryland, on 7 July said that an MQ-8C carrying the experimental Single-system Multi-mission Airborne Mine Detection (SMAMD) system made several demonstration flights off the coast of Eglin AFB in Florida in May. 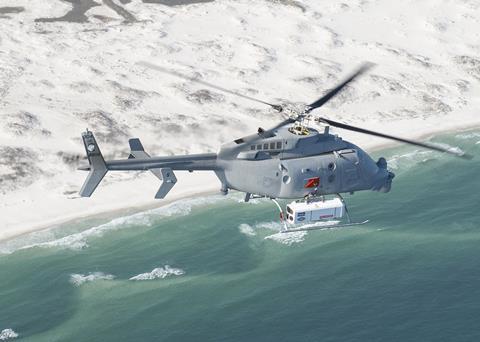 An MQ-8C Fire Scout demonstrates a new mine countermeasure prototype technology in May 2022 at Eglin AFB, Florida

The dual-pod SMAMD, developed by BAE Systems, was tested under day and night conditions against drifting, tethered and moored naval mines in littoral and deep-water areas.

The counter-mine package represents the heaviest payload carried by an MQ-8 to date, NAVAIR says.

In announcing the May test flights, NAVAIR adds the results “proved the reliable and repeatable high performance of the MQ-8C Fire Scout”.

The Fire Scout is described by its manufacturer Northrop as a “runway-independent helicopter” capable of autonomous flight in performance of intelligence, surveillance, reconnaissance and targeting missions in a maritime environment.

The rotorcraft is built on a Bell 407 commercial airframe, modified with specialised flight controls, sensors and electromagnetic shielding that allow for fully autonomous flight, including take-off and landing aboard a vessel underway.

The Fire Scout made its first operational deployment in 2021, supporting the USN’s counter-narcotics effort in the Caribbean aboard the USS Milwaukee littoral combat ship.