Leonardo Helicopters has flown the first production AW609 tiltrotor as the programme moves closer to certification. 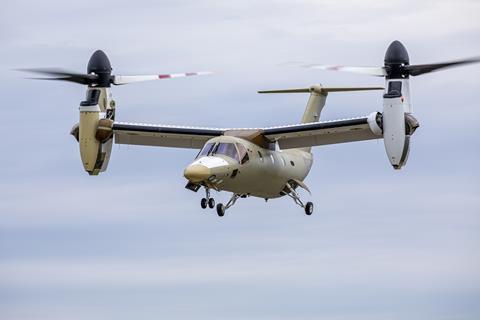 AC5 will be retained by manufacturer as customer demonstrator

Designated as AC5, the AW609 joins a prototype based in the USA and two more located in Italy, as the company pushes towards Federal Aviation Administration certification. Service entry is targeted for 2023.

It will be retained by Leonardo Helicopters as a customer demonstrator and mission expansion asset. In addition, three customer aircraft are now in final assembly.

“This amazing achievement adds to several milestones for the AW609 programme over the last year, through its technical progress and during its public appearances,” says Gian Piero Cutillo, managing director of Leonardo Helicopters.

“Together this testifies the level of maturity this ground-breaking programme has reached and our credentials to pioneer in the emerging fast rotorcraft domain.”