France has confirmed a long-planned order for 10 Airbus Helicopters H160s in a law enforcement configuration to be operated by aviation units of the Gendamerie Nationale.

Originally unveiled in a package of support measures for the French aerospace industry in June 2020, the deal adds to a 169-unit commitment for the military H160M Guepard signed by Paris last December. 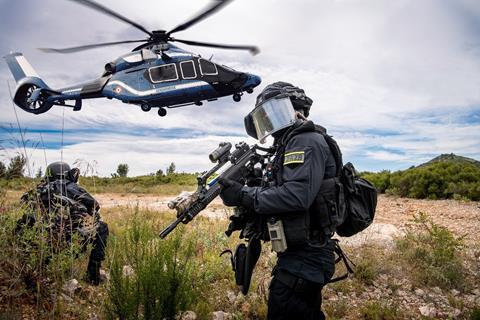 Although unveiled on 10 January, Airbus Helicopters confirms the contract was finalised by France’s DGA defence procurement agency on behalf of the interior ministry late last year.

Deliveries of the H160s to the Gendamerie Nationale will begin ahead of the 2024 Paris Olympic Games.

Airbus Helicopters says the rotorcraft will be fitted with a Safran Euroflir 410 electro-optical/infrared sensor, winching and fast roping capabilities, and will have “a tailored mission-management system”.

The Gendarmerie Nationale already operates H125, H135 and H145 helicopters. In its PlanAero document, the French government said the 10 H160s – which it valued at €200 million ($226 million) – would replace some of the service’s 26-strong H125 inventory with “more versatile” helicopters as part of an overall fleet rationalisation process.

“The French Ministry of Interior contract is an important milestone for the H160. We now have customers for the offshore transportation, private and business aviation, search and rescue and law enforcement mission segments, showing that the H160 is a truly versatile aircraft,” says Bruno Even, chief executive of Airbus Helicopters.

“Developing this new configuration for the H160 in cooperation with an experienced customer like the Gendarmerie Nationale is key to the success of the programme.”

Spain has also signalled its intention to order four H160s to operated by its Guardia Civil for law enforcement missions.