Germany has confirmed that its future fleet of heavy-lift helicopters will require in-flight refuelling capability.

Berlin in late 2017 gave the go-ahead for its BAAINBw procurement agency to begin the acquisition of around 60 helicopters to replace an existing fleet of 70 elderly Sikorsky CH-53G/GA/GS transports operated by the German air force. 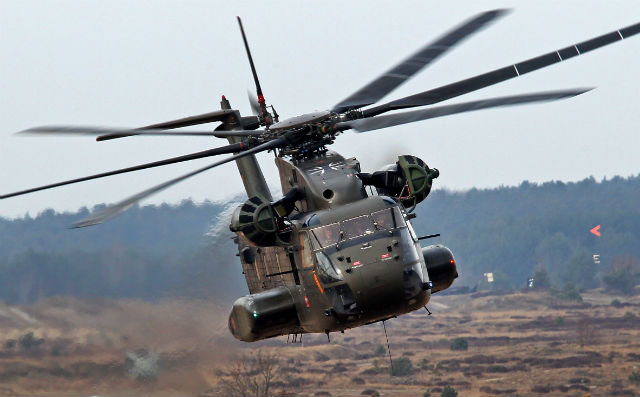 Under consideration are the developmental CH-53K and Boeing's CH-47F Chinook.

A request for proposals should be issued in May, with a selection expected in 2019, Col Bernhard Martin told the Defence IQ International Military Helicopter conference in London on 31 January. Martin, who is the air force's deputy assistant chief of staff for capability management, confirms a fleet-wide requirement for aerial refuelling on the new rotorcraft.

"We are expecting and have a requirement to have air-to-air refuelling for all our future heavy-lift helicopters," he says.

Although the CH-53K is compatible with this need, only the MH-47G variant of the Chinook has an in-flight refuelling capability. Germany may also request a longer-range version of the CH-47.

In the long term, in-flight refuelling will be performed using the Airbus Defence & Space A400M, but Germany has recently indicated that it intends to also acquire three Lockheed Martin KC-130J tankers, as part of a shared fleet with France.

Martin says the German air force's current CH-53 inventory "will reach the end of its life by about 2025".

However, obsolescence issues are already hampering the service's operational capabilities. "Due to the end of industrial support, in combination with other technical support issues, our current flying hours already show a substantial shortfall," Martin says, adding that only around 6,000h was being achieved per year across the fleet, against a target of more than 10,000h.

A contract for the future type should be awarded in early 2020, says Martin, with the first aircraft to arrive in 2023.