Hindustan Aeronautics (HAL) believes the new heavy-class multi-role helicopter it is developing for the Indian military can be “benchmarked” against the best products on the global market.

Called the Indian Multi-Role Helicopter (IMRH), the twin-engined rotorcraft could be available from 2028. It will have a maximum take-off weight of 13t and be able to carry up to 36 troops in a high-density configuration. 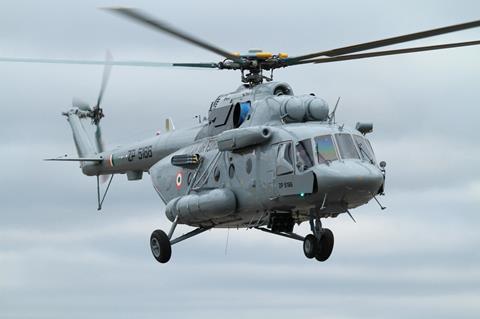 State-owned HAL estimates a domestic requirement for up to 314 examples across all three services, predominantly as a replacement for Mil Mi-17s, but believes it can also score export success with the new helicopter.

HAL detailed its progress on the IMRH during a 6 February presentation at the Aero India event in Bengaluru. The rotorcraft has already passed the preliminary design review stage, the company says, which will enable it to freeze the configuration within six months of receiving go-ahead from the Indian defence ministry. That milestone is expected in late 2021 or early 2022.

First flight should take place around four years after New Delhi’s green-light, HAL says, leading to operational clearance of a basic utility variant for the army after 24 months of testing; an armed variant will then follow a year later.

HAL expects to produce three to four flying prototypes, plus ground- and structural-test articles, with the development activity lasting seven years in total.

Featuring a five-blade main rotor and four-blade, bearingless tail rotor, composite fuselage and glass cockpit, the IMRH will have 75% domestic content. The main exception will be the helicopter’s engines, which are being sourced from a Western manufacturer; two companies have already been asked for proposals for 2,800shp (2,000kW)-class powerplants, HAL reveals.

However, HAL says it will produce the entire transmission, including the main and tail rotor gearboxes, plus the avionics and digital automatic flight controls.

Payload at sea level will be 4t, falling to 1.5t at 13,000ft; due to the requirements for performance at altitude the rotor diameter is 21.2m (70ft) – roughly that of the 13t Mi-17. In a standard transport configuration, the IMRH will accommodate 24 troops.

Although New Delhi is the chief customer, HAL says it has “designed the helicopter with the global market in mind” and has “benchmarked” the IMRH against five current heavy-class rotorcraft: the Airbus Helicopters H225M; Leonardo Helicopters AW101; Mi-17; NH Industries NH90; and Sikorsky S-92.

“In every aspect of our design we have benchmarked against the best features available on these helicopters,” it says.

While the IMRH is primarily aimed at the military market, HAL also sees the opportunity to produce a civil version, notably in a VIP layout.

HAL has been working on the development since 2017 in the anticipation of an Indian requirement materialising ahead of the planned withdrawal from service of the air force’s 239 Mi-17s from 2028.

While it does not have a long history of producing helicopters, HAL argues that the success of its 5.5t Dhruv medium-twin – and Rudra and Light Combat Helicopter variants – show that it has “graduated to the next step”.