The flight was announced in a brief tweet by the US Naval Air Systems Command. 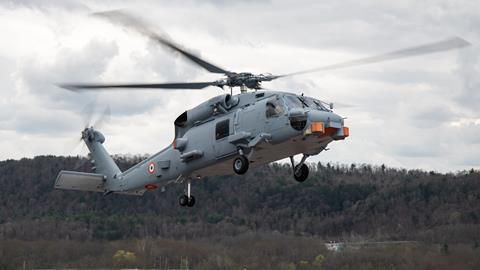 Twenty-one of the rotorcraft were earmarked for the Indian navy under the auspices of the Foreign Military Sales process, and three for the US Navy (USN). At the time, Sikorsky said the first Indian delivery was anticipated in the spring of 2021. The three USN helicopters were to aid accelerated training for Indian personnel.

Overall, New Delhi will obtain a total of 24 MH-60Rs. The country’s Cabinet Committee on Security signed off on the deal in February 2020.

India’s quest to acquire a modern ASW helicopter started in 2005, with the Sikorsky S-70B Seahawk emerging as the winner in 2014 before negotiations floundered over cost.

The maiden flight of India’s first MH-60R follows news in December 2020 that the type had emerged victorious in a South Korean competition for 12 new ASW helicopters. On 13 April, Lockheed signed a production contract for these rotorcraft.

Cirium fleets data shows that four militaries operate a total of 305 MH-60Rs. The USN is the largest operator, with 263 examples, followed by the Royal Australian Navy with 23, the Royal Saudi Navy with 10, and the Royal Danish Air Force with nine.

In addition to the Indian and South Korean orders, which total 36 examples, Greece’s navy has four MH-60Rs on order.