Certification for the medium-twin was achieved in September. 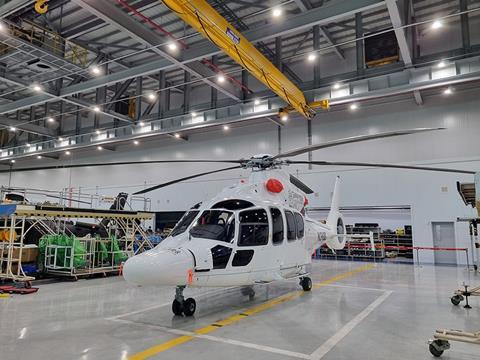 Delivery of the first LCH, in an emergency medical services configuration, went to local operator Gloria Aviation; service entry is scheduled for December in Jeju.

Airbus Helicopters has effectively transferred production of the type to its South Korean partner as part of their joint collaboration on Seoul’s LCH and Light Armed Helicopter (LAH) programmes.

Qualification of the LAH is due “in the coming weeks”, says Airbus Helicopters, which will enable the start of serial production for the Republic of Korea Army by year-end.

In addition, the pair are preparing new joint development programmes, the European manufacturer reveals. These will “leverage Airbus’s technical know-how in the field of helicopter drive systems and flight-control systems, while tapping into KAI’s established local industrialisation expertise in the country”, it says.

“We are also pleased to take our partnership a step further to prepare for the development of new variants that do not just meet the operational requirements of the end-user, but one that would bring tremendous technical and economic benefits to the local aerospace industry for years to come,” says Bruno Even, Airbus Helicopters chief executive.

Airbus Helicopters continues to promote the H155/LCH as a part of its model range, with customers able to order the South Korean-assembled rotorcraft through either company.