Prompted by an incursion made by Sulu rebels in Sabah in 2013, Kuala Lumpur has already outfitted three of the Royal Malaysian Air Force’s S-61s with 12.7mm door guns, to provide armed support for ground troops.

“The army plans to arm the [AW109] helicopters with [7.62mm] gatling guns” to expand in this capability, says Dr Mohd Yazid Ahmad, director of the mechanical and aerospace technology division at Malaysia’s science and technology research institute for defence. The service’s “Hirundo” fleet is currently employed only in a light observation role.

Speaking at an IQPC Rotary Strike event in London on 20 January, Ahmad also reveals that the air force’s S-61 fleet is planned to undergo a major package of enhancements before some of the aircraft are transferred to the army air wing. 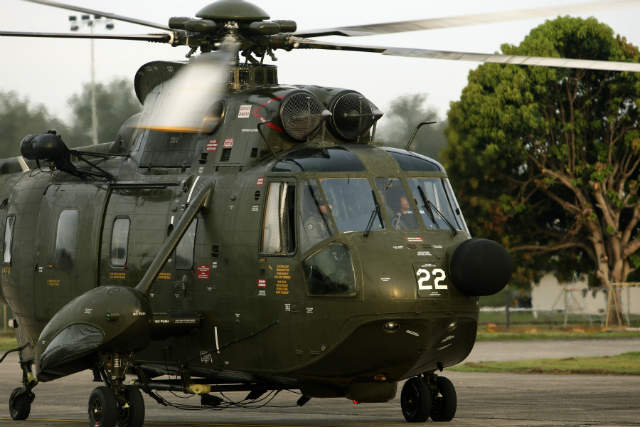 Malaysia had previously planned to remove its aged Nuri fleet from use by 2012, with Ahmad noting that 89 personnel have been killed in 15 crashes involving the type since it was introduced. However, with the nation having ordered only 12 of a planned 28 Airbus Helicopters EC725s as replacements, “this has forced the service to prolong the life of its Sikorskys”, he says.

A night vision goggle-compatible glass cockpit upgrade has already been performed on part of the fleet by Airod with a foreign partner, an enhancement Ahmad describes as “a modern, reliable and cost-effective product that will carry the Nuri well into the future”. A wider project to enhance the type’s performance and safety is also being studied, he adds.

Flightglobal’s Ascend Fleets database records the air force as having 31 S-61s still in operational use, built between 1967 and 1978.

If proven viable through a pilot project involving one aircraft, up to 26 S-61s will receive upgrades to their main and tail rotor blades and gearboxes, and be equipped with a digital datalink, self-protection equipment, armoured protection and a pintle-mounted machine gun at the cargo door.

Around half of the modified aircraft are expected to transfer to the army, Ahmad says. “Hopefully with this upgrade the army will have the capability with a live combat helicopter,” he adds. Roles will include utility transport, plus airborne command and control and search-and-rescue.