US electric truck maker Workhorse is giving a Le Bourget debut to its SureFly personal helicopter, which it hopes will enter service in 2019 – and has already taken pre-orders at the show.

Designed as an "inexpensive, easy-to-fly, super-safe, short-hop helicopter", the SureFly uses a 200hp (150kW) petrol engine to power a pair of generators, which in turn provide power for eight electric motors, each driving a two-blade rotor.

Lithium-ion batteries located in each arm offer sufficient back-up for 5min of emergency flight, with additional safety provided by a ballistic parachute.

Founder and chief executive Steve Burns says the goal for similar projects is a tiltrotor design that can transition to higher-speed forward flight.

"There's none of that on our first version – it is very simple and very safe." 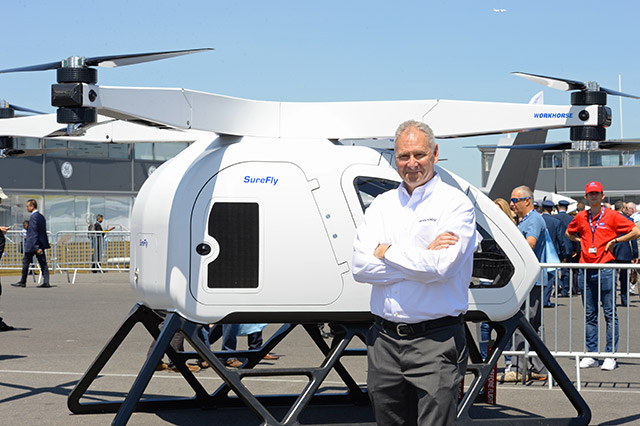 He sees a market for the all-carbonfibre design from the emergency medical services segment, as well as farming.

Burns says the US Federal Aviation Administration has been helpful as it seeks certification for the SureFly.

"They have just decided that if you can prove your aircraft is safe, they don't want to stifle innovation," he says.

It hopes to achieve approval for the SureFly in 2019, with a first flight scheduled for this year.

It began taking pre-orders for the $178,000 aircraft on 19 June, and has already attracted several commitments, says Burns.