The test took place at the company’s production centre in Sacheon, and marks the last stage of ground tests, says the company. A first flight could happen before the middle of the year.

The LAH is powered by a new Safran engine, designated the Arriel 2L2, which is the most powerful variant in the Arriel family. The LAH’s Light Civilian Helicopter (LCH) variant will be powered by the Arriel 2C2.

In June 2016, Safran said that it and Hanhwa Techwin would jointly develop the Arriel 2L2 in South Korea. Hanhwa Techwin’s role is to license produce the engine, manufacture key parts, and perform final assembly at its Changwon factory. It will also provide MRO support for the engine. 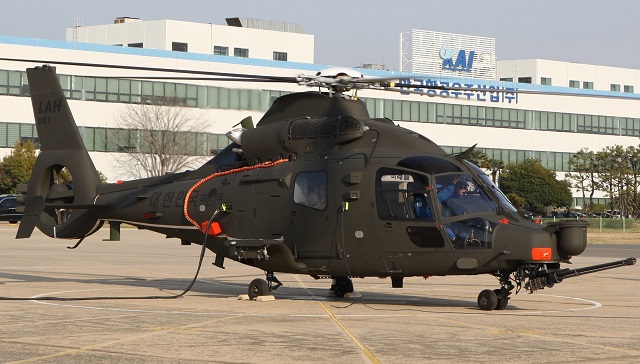 At the Paris Air Show in June 2017, Safran and Hanwha announced that they had conducted the first ground run of the Arriel 2L2.

The Airbus Helicopters H155 forms the basis of the LCH/LAH family. This will help extend the life of the H155, which from 2018 was superseded by the H160.

The LAH will replace types such as the MD Helicopters MD500 and Bell AH-1J/S Cobra in service with the South Korean army.