Bell is conducting a tour of Southeast Asia with its Bell 505 helicopter, where the light single has found opportunities in the air taxi, tourism, and training markets.

The manufacturer shipped a company-owned example (N505LD) to the region in a container. It has already visited Indonesia and Singapore, and upcoming stops include Malaysia, Thailand, Vietnam, Laos, and the Philippines. In addition, the five-seat helicopter will perform demonstration flights in Nepal.

Customers the company is speaking to on the trip comprise about 60% corporate and 40% parapublic, says David Sale, managing director for Bell Asia-Pacific.

“The Bell 505 in Asia is huge for us right now,” says Sale. “My whole sales team has been anxiously awaiting its arrival.” 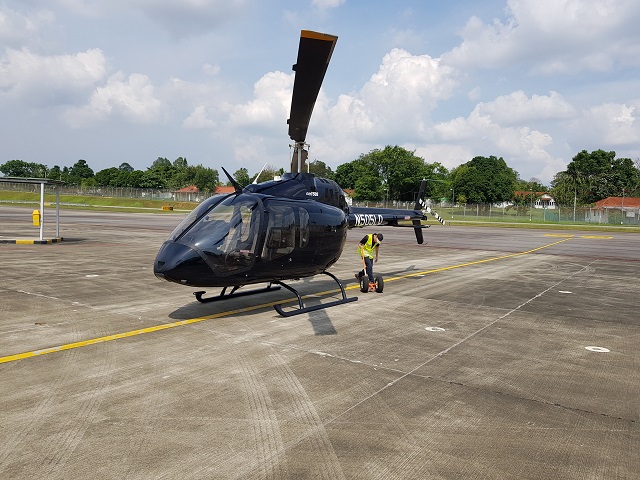 He notes that the two Bell 505’s with Indonesia air taxi start-up White Sky are serving well. Through an app, people can book a flight on a White Sky helicopter, thus bypassing Jakarta’s notorious traffic jams. Key missions include flying people between Jakarta Soekarno-Hatta International airport and about 70 points, including major hotels, in the city.

Flight Fleets Analyzer shows that there are 27 Bell 505s in service in the Asia-Pacific with 14 operators, with four firm orders and 175 letters of intent. Key operators include the Japan Coast Guard (four examples), China’s Reignwood Group (four), and Japan’s Seco International (four).

Since the Singapore air show in February, where Bell promoted the type, it has landed six new sales: three in the Philippines, and one each in Australia, New Zealand, and Sri Lanka. The helicopter is powered by a single Turbomeca Arrius 2R. 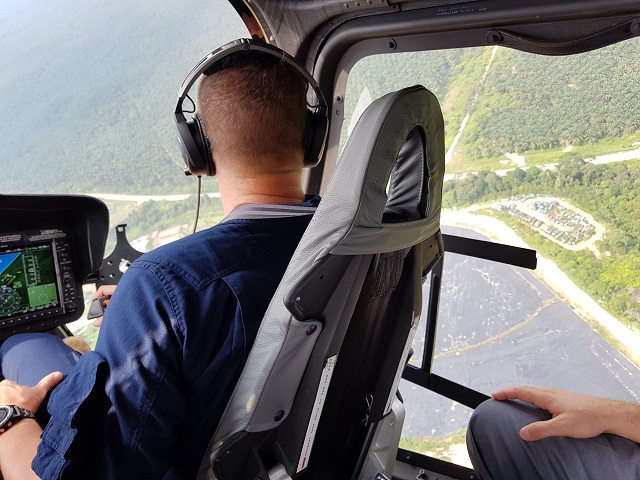 During a short media flight over Malaysia, a Bell pilot demonstrated its ease of operation and the simplicity of its cockpit. The G1000 can carry up to 20 distinct pilot profiles, and is able to alert pilots to any problems well before they become critical.

Moreover, the large canopy offers excellent visibility, either from the two front seats or the three seats in the rear.

On a major military requirement in South Korea for 41 new helicopters, Bell has yet to receive any news about where the competition is heading. The company had pitched the Bell 505, and Leonardo Helicopters the SW-4. Seoul reportedly scuttled the deal owing to price concerns. 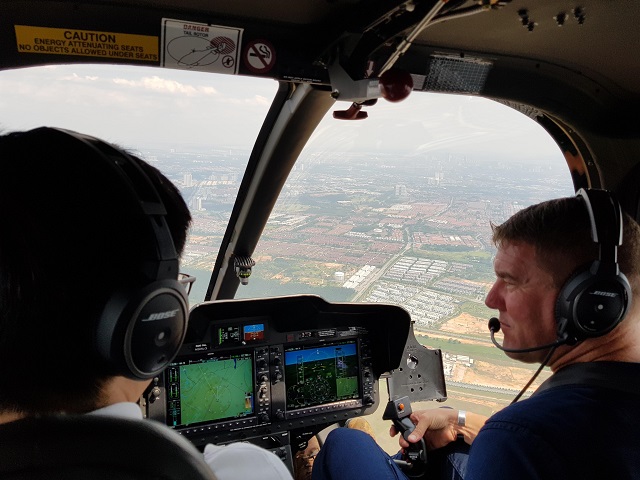 Sale also said that rising oil prices are generating renewed interest in large helicopters, such as the Bell 525, from the offshore oil industry.

Amid a low oil price environment, helicopter lessors were forced to cut their rates on large aircraft, thus depressing demand for new-build offshore helicopters. Sale says there are signs that the situation is improving, with offshore helicopter utilisation rates starting to rise.