A re-engining programme for the UK Royal Navy’s (RN’s) fleet of Leonardo Helicopters AW101 Merlins in service until 2040 appears “unlikely and improbable”, according to the current powerplant provider for the type.

UK Ministry of Defence (MoD) officials have been considering how to address obsolescence issues with the three-engined helicopter in order to keep the fleet operating until 2040. The RN’s Merlins are currently powered by the Safran Helicopter Engines (SHE) RTM322. 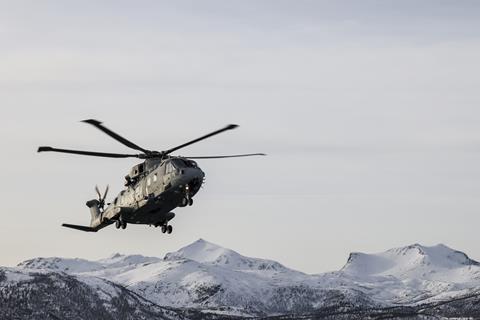 Merlin will continue in service until 2040

In a written parliamentary answer in January, minister for defence procurement Jeremy Quin said that work to “determine the future support requirements” for the Merlin fleet was under way, which “may result in a different engine being installed on Merlin”. However, he cautioned that no decision was expected before mid-2023.

But speaking at a media event on 25 March, SHE UK chief executive Nick Earl said the MoD has flagged “significant budgetary constraints” around future support for the Merlins, with a flat budget going forward, in his view making re-engining “unlikely and improbable”.

Instead SHE is proposing a series of improvements to the 165 RTM322s for the Merlin fleet, which will “roll back” from the newer Aneto engine.

Although based on the RTM322, the Aneto, which was certificated in 2019, features several improvements, notably a new compressor and hot section.

Modifications to the in-service RTM322 fleet are already being incorporated during engine overhauls, including improved combustion chamber segments “to improve the reliability”, says Michael Hawkes, SHE engineering director.

SHE had previously participated, alongside rival engine supplier GE Aviation, in the early stages of a procurement seeking options for the Merlin fleet. However, that ended prematurely with the publication of the MoD’s integrated review in March 2021.

Earl says the manufacturer’s previous offer, which he describes as “very cost-effective”, is “still available for [the MoD] to take up”.

While he declines to provide detail of the company’s offer citing an ongoing competitive process, Earl points to 15 modifications that are “progressing from the Aneto to the RTM” and which are waiting for approval. Additional changes will follow, he says.

Another variant of the RTM322 also equips older examples of the Boeing AH-64 Apache attack helicopter currently operated by the British Army. These are transitioning to the newer E-model variant which are instead powered by GE T700s. SHE has proposed recycling components from the surplus RTM322s into the spare parts pool for the Merlin fleet, driving additional cost savings.

Overall, SHE’s offer will drive a cost saving of around 25% over “historical support costs”, says Earl: “Use of the Apache engines is a good contributor into that number.”

Darren McIntosh, military campaign manager, adds: “Staying with us is the lowest risk option – they don’t need to change the engine.”