LAH production is envisaged as running to 2031, with W5.75 trillion ($4.3 billion) earmarked for the overall programme, according to Seoul’s Defense Acquisition Program Administration (DAPA). 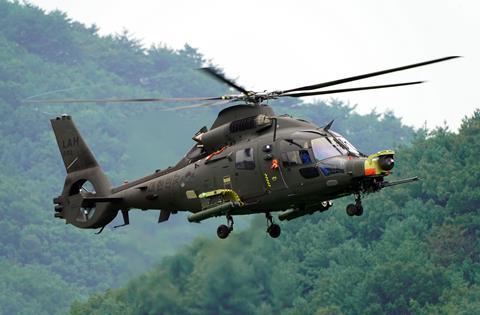 The LAH plan was approved by the Defense Program Promotion Committee on 28 November, according to DAPA.

The first batch of operational LAHs is to be delivered by 2024, reports South Korea’s official Yonhap news agency. A contract signing between DAPA and KAI is likely before the end of the year.

The LAH and its Light Civil Helicopter variant are based on the 4.5t Airbus Helicopters H155. In South Korean service, the LAH will replace ageing Bell AH-1S Cobras and MD Helicopters MD500 Defenders.

The LAH is armed with a 20mm cannon, 70mm rockets, and guided air-to-ground weapons, according to KAI. Digitally rendered promotional videos from KAI show the type operating in the scout role, as well as attacking tanks and wheeled vehicles.

In addition, DAPA says the committee has cleared the acquisition of additional “large attack helicopters” from overseas. Seoul will spend W3.3 trillion on this programme, which is to run from 2023-2028.

In April 2021, DAPA said it would earmark W3.2 trillion for new attack helicopters.

The large attack helicopter deal is a follow-on purchase to a previous acquisition of 36 Boeing AH-64E Apaches. South Korean media reports suggest that Seoul aims to obtain an additional 36 Apaches.