Cathay Pacific is looking to fill 4,000 roles across various sectors in the next two years, as the airline resumes flights to more points across its network with restrictions gradually easing up in its home city of Hong Kong.

Airline chief Augustus Tang, who was speaking to FlightGlobal at the IATA annual general meeting in Doha, says about half of the new recruits will be for cabin crew roles, with another 700 for pilots and the rest for frontline service staff. 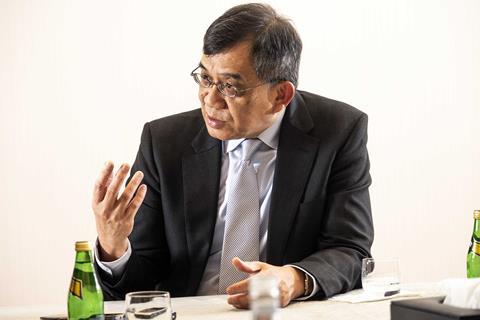 It is the first time the embattled airline group is conducting a major hiring spree since a wide-ranging restructuring in October 2020 led to massive job losses.

It also comes as Hong Kong’s once-onerous travel curbs begin to loosen up, which has led to Cathay resuming more flights across its network.

Tang estimates that by year-end, Cathay would be flying to more than 60 points in its pre-pandemic network - twice the number from the start of the year. He does not disclose how much capacity will increase, but stresses that the easing of curbs has allowed it to “operate a lot more flights”.

Recent traffic figures from the airline show that capacity is only at 4% pre-pandemic levels in May.  The figure is a slight improvement from earlier in the year, when it was at just 2%, as a result of tightened restrictions amid a surge in Omicron infections in the city.

Cathay also previously stated that the addition of flight capacity in the second quarter, as well as continued strength in the cargo market, will help it narrow its losses for the first half of 2022