This year’s IATA AGM in Dublin will see a number of new faces, and a few familiar ones in different roles, among leading carriers. 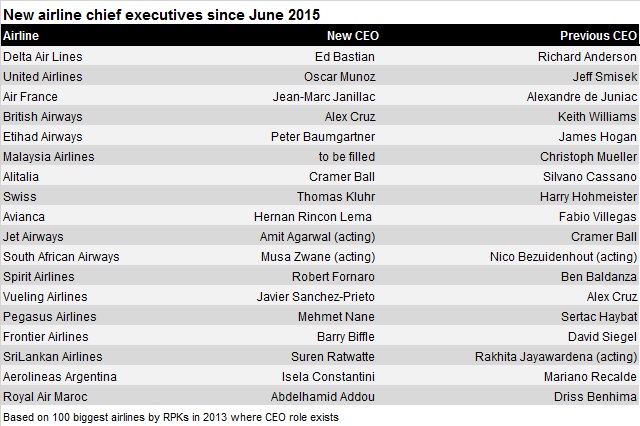 In Europe there is a new chief at the helm of British Airways and another due to take charge at Air France-KLM. The position at the latter became vacant as a result of Alexander de Juniac’s move to take over as director general of IATA. The SkyTeam carrier has turned to Jean-Marc Janiallac. A former chief operating officer of French carrier AOM, after occupying senior roles in rail and bus transport company RATP Dev, he has spent the last four years as head of international transport firm Transdev. He will take up his new role on 4 July.

Vueling chief executive Alex Cruz meanwhile in May took over from the retiring Keith Williams at IAG sister company British Airways. Williams had been at the helm of BA since the formation of IAG in 2011. Cruz is in turn replaced at the Spanish low-cost carrier by Javier Sanchez-Prieto, finance chief at another IAG carrier Iberia.

May also saw Delta's new chief executive Ed Bastian take the helm after Richard Anderson's retirement. Anderson leaves the Atlanta-based carrier in far better shape than when he took the job in September 2007 shortly after it exited Chapter 11 bankruptcy protection. Delta reported an operating profit of $7.8 billion on revenues of $40.7 billion in 2015. Its operating margin was 19.2%. Bastian was alongside him for most of that time, as airline president.

But there was no such orderly transition for United Airlines. The airline was rocked by the sudden resignation in September of Jeff Smisek - the former Continental Airlines who led the enlarged United following its merger in 2010. Smisek’s departure, along with two other executives, came as US authorities continue to investigate the Port Authority of New York and New Jersey, which operates Newark Liberty International airport.

Smisek was replaced by Oscar Munoz, formerly president and chief operating officer of transport and logistics company CSX. But Munoz was hospitalised barely a month later over a heart condition for which he subsequently underwent a transport. Munoz returned to his post in March.

There were several other changes at the top of US carriers over the past 12 months. Ultra low-cost carrier Spirit Airlines appointed Robert Fornaro as its new chief executive and president in January after the departure of Ben Baldanza. Fornaro, who joined Spirit's board in May 2014, was president and chief executive at AirTran from November 2007 until its merger with Southwest Airlines in May 2011.

Baldanza had driven rapid growth at Spirit after more than a decade at the helm. In March, he was recruited to the board of Icelandic low-cost carrier Wow Air.

Denver-based Frontier Airlines meanwhile appointed its president Barry Biffle as chief executive, in succession to David Siegel who has taken the helm of aircraft lessor AWAS. Biffle, the former VivaColombia boss, has been president at the low-cost operator since July 2014.

Flightglobal research shows 18 chief executives among the 100 biggest airlines have moved on since last June - compared to 16 over the previous period.

That list does not include Spicejet chief operating officer Sanjiv Kapoor, who also left during the last 12 months - re-emerging in February this year as chief strategy and commercial officer at Indian carrier Vistara. Kapoor had been the primary remaining member of the executive leadership team and founder Ajay Singh, who acquired control of the airline again in early 2015, has been leading the carrier.

The list includes the recent change at Etihad Airways, under which James Hogan is taking a new group leadership role and Peter Baumgartner becomes chief executivep of the Gulf Carrier. Baumgartner, who joined the Abu Dhabi-based carrier in 2005, had been serving as chief operating officer.

There were also further changes at Etihad Airways partner carriers Alitalia and Jet Airways. Chief executive of the Indian carrier, Cramer Ball, stepped down after 18 months in the role to take charge of Alitalia. He filled the role left vacant at the Italian carrier after the short-lived tenure of Silvano Cassano.

Other notable changes at the top over the last 12 months include the departures of Fabio Villegas at Avianca and most recently Christoph Mueller at Malaysia Airlines. Villegas stepped down from the Colombian carrier earlier this year and has since been replaced by former Microsoft executive Hernan Rincon Lema.

Meanwhile Mueller's high profile stint in turning around Malaysia Airlines - which has been reporting positive signs - has been cut short after he announced he will leave the airline for personal reasons in September.