Six months from now, the German air force should receive its first new tactical airlifter in more than 40 years, with the expected delivery of its lead A400M.

Scheduled for acceptance during November, aircraft MSN18 is the twelfth production example of the A400M from a combined order for 170 from European partners Belgium, France, Germany, Luxembourg, Spain, Turkey and the UK, plus four for first export buyer Malaysia. Berlin – which formally has 53 of the type on order – will follow existing operators France and Turkey in introducing the new transport, and the UK, which is due to accept its first example in September.

MSN18 entered final assembly at Airbus Defence & Space’s San Pablo site near Seville, Spain in early February. By 7 May, the aircraft was in the facility’s “Station 35” position, where the structurally complete A400M undergoes a range of ground system tests before its four Europrop International TP400-D6 engines are installed. 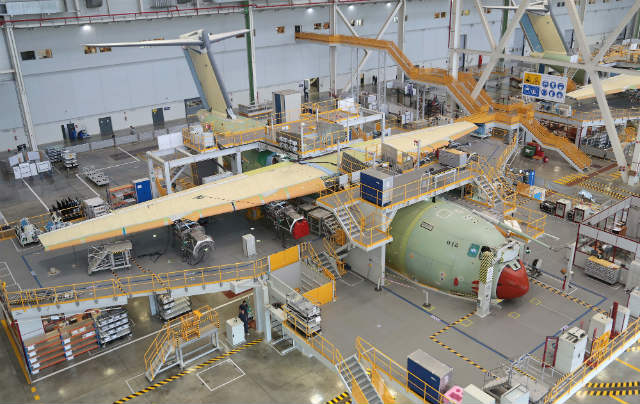 The European transport will be making the type’s third appearance at an ILA show from 20-25 May, where Airbus is due to showcase MSN3 – one of its remaining three development aircraft – in the flying display. One of the French air force’s future examples, MSN11, is also due to be on the static line. Paris received its lead “Atlas” in August 2013, and has already used its first two to perform training activities at Orléans air base and logistics supply flights. The latter include a first international mission to deliver 22t of supplies to Bamako in Mali, flown on 29 December 2013.

Germany is acquiring the A400M to replace its air force’s remaining active fleet of C-160D Transall airlifters. Flightglobal’s MiliCAS database records this as totalling 69 aircraft, delivered between 1968 and 1972.

The new type will deliver a significant increase in lift potential, with its maximum useful payload capacity of 32t more than twice that of the older type. Its operating range and flight speed are also greatly increased versus the legacy model, while its 141t maximum take-off weight also dwarfs the roughly 49t limit of the C-160D. 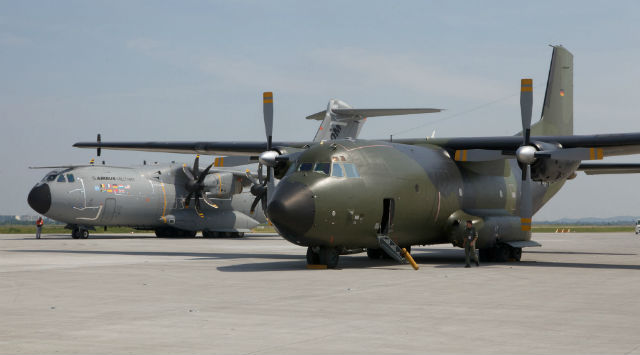 Germany’s first A400M will be delivered to the Luftwaffe’s 62 Sqn at Wunstorf air base, where infrastructure improvements are already being made to welcome the new type. Training activities will be performed at the site near Hanover, which is to have a school house equipped with two simulators, and will also boast a rear cargo trainer.

Wuntstorf’s Transalls are to remain in use until the end of 2015, as additional examples of the “Atlas” are introduced. Other German C-160 units are currently located at Hohn air base in the north of the country, and at Landsberg-Lech in the south.

Airbus is scheduled to rapidly establish the Luftwaffe’s A400M fleet. This year’s lone example will be followed by five more in 2015, and another 11 the following year. This coincides with the multinational programme hitting its planned full production rate.

However, budget pressures have taken their toll. Germany’s original commitment for 60 A400Ms was reduced to 53 as part of a renegotiation made to save the programme from possible cancellation in April 2011. Subsequently, Berlin announced that it only plans to operate 40 of its on-order aircraft, meaning that new international buyers must be found for those transports deemed surplus to its requirements. Spain has also indicated that it will not be able to afford to operate all of the 27 Atlas airlifters it has on order, with just 14 expected to be maintained for its air force. The UK also trimmed its plans from 25 to 22 airframes, as part of the contract renegotiation three years ago.

Speaking last December, Tim Rowntree, director of Europe’s OCCAR defence procurement body, confirmed that none of the A400M launch nations had requested a reduction from the already-revised 170 aircraft on order.

“We have a contract with OCCAR, which represents its partner nations and is their interface,” says Airbus, when asked about the potential long-term future for the 13 extra German A400Ms. “We do not comment on discussions with OCCAR,” it adds.

The same budget pressures have also affected Germany’s combat aircraft and rotorcraft programmes. The nation – along with its programme partners Italy, Spain and the UK – will not proceed with the planned final Tranche 3B build phase of the Eurofighter programme. This is currently expected to see production of the type conclude during 2018, bar the receipt of fresh export orders. The Eurofighter is now wholly responsible for Germany’s air policing activities, since the Luftwaffe’s final McDonnell Douglas F-4Fs were retired in June 2013, after a service life lasting almost 40 years.

Berlin’s ambitious fleet plans for new-generation rotorcraft have also been revised. Its offtake of armed Airbus Helicopters Tigers has dropped from 80 to 57, while that of the NH Industries NH90 tactical transport has been reduced from 122 to 82. Agreed with industry early last year, the alteration to the latter deal also includes the eventual introduction of 18 maritime examples to be produced in a German-unique “Sea Lion” configuration. These ship-based helicopters will replace its navy’s aged Westland Sea Kings.

While the A400M represents the future of Germany’s tactical transport fleet, its current stalwart will also be in the spotlight at the ILA show, with examples from two nations due to be on static display and in the daily flying routine.

First flown in prototype form in 1963, the Transall remains in service with the air forces of France, Germany and Turkey. Flightglobal’s MiliCAS database records these as having a combined 126 operational examples. At 69 aircraft – plus two other examples assigned to its WTD-61 test unit – the Luftwaffe’s inventory is the largest. France still has 37 C-160Rs and a pair of Gabriel electronic intelligence-gathering aircraft, while the Turkish air force’s fleet now stands at 16 D-model transports. One of Ankara’s aircraft should be an attraction within the show’s static park.

All three nations will replace their aged Transalls with the new-generation A400M, with their services planning to eventually operate 50, 40 and 10 examples, respectively.

German industry has a key involvement in the A400M project, the workshare for which was arranged using a juste retour model, reflecting the nation’s one-time commitment for one-third of the original 180 examples to be manufactured. The transport’s main fuselage is produced in Bremen, before being transferred to Seville using an A300 Beluga, while its TP400-D6 turboprops are assembled in Munich by MTU Aero Engines. The company has a 28% stake in the Europrop International consortium, the other members of which are ITP, Rolls-Royce and Snecma.

The German air force’s air transport fleet also currently includes five A310s: four configured as hose-and-drogue refuelling pod-equipped tankers used to support its Eurofighters and Panavia Tornados, and one operated solely in a transport role. As such, the availability of the new A400M is a key development for the Luftwaffe’s future operational capability.