A Lockheed Martin C-130B operated by the Indonesian air force has crashed after taking off from Medan, its fourth loss of a Hercules variant in 15 years.

Indonesian media shows that the aircraft crashed after midday in a populated area. Media reports indicate that 12 personnel were aboard the aircraft, and that five bodies have been recovered so far.

Flightglobal was unable to get through to Indonesian officials about the crash. The crash is likely to return the spotlight to Indonesia's air safety record following the crash of Indonesia AirAsia flight QZ8501 on 28 December, resulting in the loss of 162 lives.

Social media indicate that the aircraft involved in the crash bears registration A-1310.

Flightglobal’s Ascend Fleets database indicates that this aircraft was originally delivered in 1961. It was parked from 1999 to 2004, when it returned to service.

It was scheduled to undergo modernisation work during 2016. 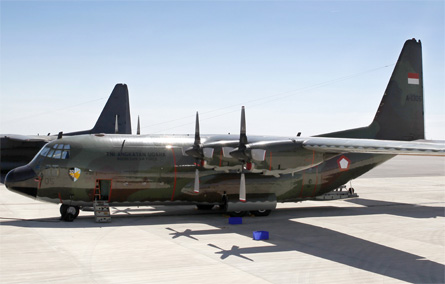 Ascend shows that this is Indonesia's fourth major accident involving the Hercules since 2000.

In 2001 an air force L-100-30 was lost after catching fire upon landing. All 83 passengers and 12 crew escaped. In 2009, a C-130B landed short and damaged its undercarriage. All seven passengers and eight crew were uninjured, but the aircraft was written off.

In 2009, in one of Indonesia's biggest air disasters, an air force L-100-30 crashed on approach to Iswahyudi Airport after a flight from Jakarta Halim Perdanakusuma airport. The disaster resulted in 97 deaths and 15 injuries.