Boeing's best-selling twin-aisle aircraft, the 777, has in recent times been somewhat unfairly overshadowed by its smaller sibling, the 787. The comparative newness of the Dreamliner – and by extension its interior – helping it to steal the headlines.

However, that is not to say there has been no evolution of the 777’s interior over the past few years. Far from it, says Larry Schneider, vice-president and chief project engineer for the programme, who insists that Boeing’s big twin remains the “benchmark” of its widebody product line.

“The 777 may not have been in the news as much, but it’s not been neglected. It’s still getting our attention and continues its evolution,” he says.

The airframer recently announced a package of performance enhancements for the twin-aisle, driven by the imperative of maintaining the high production levels – presently at 8.3 aircraft per month – of the current model before the arrival of the next-generation 777X in 2020.

Most of changes, which will debut from the third quarter of 2016, are focused on improving fuel burn through, for example, aerodynamic “clean-ups” of the airframe and updates to the General Electric GE90 engines.

However, the package also covers optional alterations to the interior that, in certain configurations, could allow the addition of an extra 14 seats.

“One way to improve fuel-burn-per-seat is to have more seats on the airplane,” says Doug Ackerman, airplane-level chief engineer for the 777 programme.

Boeing proposes replacing certain of the canted seat rails at the rear of the fuselage with straight versions, which, if applied to a 10-abreast layout, would allow an additional four seats to be installed.

Allied to this are modifications to the rear lavatories so they take up less floor space while retaining their usability and interior dimensions. This alteration allows another six seats to be added to a 10-abreast layout. It is, says Ackerman, “something we are really proud of”. 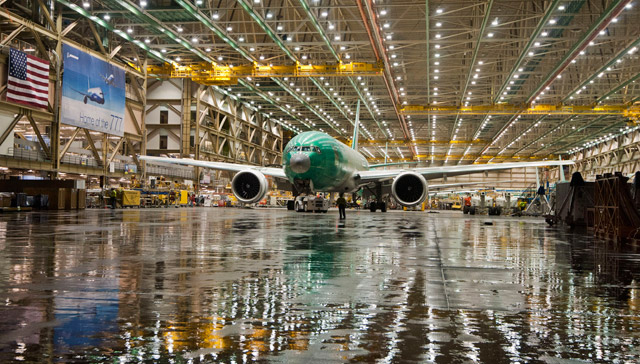 So, for a typical three-class configuration, airlines will see a gain of 10 seats. However, the effect is more pronounced in a two-class cabin where an extra 14 seats can be added, says Schneider.

However, as Ackerman points out, as well as potentially enabling a carrier to increase capacity, the optional changes also grant additional flexibility to the interior configuration. For example, instead of adding more seats, the airline could instead opt to give additional pitch or allow a greater recline angle on previously restricted seats.

“You might only need two to three more inches and you can open it up into a more comfortable position for that seat,” he says.

Although seating and lavatory changes are making the headlines at the moment, they are part of a broader, almost constant process of product improvement which has been in progress since 2010.

Included in the wide options package are electro-mechanical window blinds for left-turning passengers, new-generation LED lighting and its Premium Arch for the door 2 entryway.

On the face of it, Boeing appears to be taking features that have been successfully introduced on the 787 and implementing them on the 777. However, says Schneider, the truth is slightly more complex, in that the Dreamliner itself used a number of interior features that had been “validated” previously on the 777.

And while the 777 may be receiving upgrades derived from the 787 – or even 737 – those are the latest iterations of that technology. So, for instance, the LED lighting that has transitioned onto the long-range twinjet is “half a generation” newer, boasting better colour consistency, lighter weight and lower power consumption than the system on the Dreamliner.

Schneider says it is too early to say which airlines will opt for the revised layouts, noting that “if you don’t get the benefit out of the additional seat track then you won’t want the additional weight”. In his view, those with 10-abreast seating are more likely to adopt it than those with nine-abreast layouts.

Both Ackerman and Schneider say that the options available on the 777 fit in with airlines’ desire for differentiation through customisation of their interiors. For instance, the Premium Arch, which turns the potentially utilitarian gangway into a spacious entry area, has only been selected by a small percentage of airlines, but those that have chosen it have installed it on a relatively large number of aircraft.

“In some cases they have even given it their own branding – we love that,” says Schneider.

Meanwhile, changes have been brought to bear on the single-aisle range too. Space may well be the final frontier, but for Boeing – and its airline customers – space is something else entirely. Given the confines of the average narrowbody – a 737 has an interior diameter of 11ft 7in (3.53m), slimmer even than the fans on some large jet engines – then it is easy to see that real estate is at a premium.

Of course, decades of refinement have meant that most of the available space has already been utilised. And while you could alter the size of some cabin features, it is difficult to do that without encroaching on passengers’ personal space.

But the inexorable rise of low-cost carriers presents another related problem. As elements of that business model spread into the wider domain, charges are increasingly levied on hold baggage and as a result, passengers are ever-keener to bring the largest possible cabin bag on board. However, overhead bins being what they are, the boarding process can turn into an undignified scrum as capacity is quickly reached. In turn, passenger frustration rises, bags are stowed some distance from their owners and the whole embarkation process takes longer than it needs to. And pity, too, the poor cabin staff, who have to deal with tetchy customers, find spaces for bags or even offload them for transportation in the hold. It is a scenario that plays out hundreds of times a day on both full-service and low-cost carriers and is deeply unsatisfactory for all concerned.

However, Boeing believes it has the answer with its new Space Bins for the 737. They boast 50% more capacity than the equivalent bins used on its Sky Interior product, themselves the largest currently available. A Space Bin-equipped 737-800 can now accommodate 174 bags, as opposed to 118 with the regular pivot bins.

The lip of the Space Bins is also some 3in lower, allowing better visibility into the container. They also require a similar closing force as the pivot bins without the need for a close-assist mechanism. And all this is achieved without overly encroaching into a passenger’s space, the main difference being that the passenger service unit is lowered by 2in.

Although available as both retrofit and line-fit options, the initial examples will make their debut on a 737-900ER for Alaska Airlines, which is due to be handed over in the fourth quarter.

Brent Walton, manager 737 interiors, new features, says that a number of factors led the airframer to develop the Space Bins. “The key reasons were to reduce the stress for passengers through knowing they have space for their bags when they board and reducing the workload for airlines and flight attendants,” he says.

Walton says that the catalyst for the concept was both a recognition that there was “growing interest” in a larger bin – “some would even say it’s common sense” – a trend that he thinks has been gathering pace “over the last 20 to 30 years”.

“But we have also had airlines coming to us to ask if we could take a look at a larger design,” he adds.

The Space Bin concept – which is also available on the 777 – has already made it to the shortlist of the prestigious Crystal Cabin Awards, despite still going through the development process.

Aside from the increased volume – and the fact that bags can be stored upright instead of wheels first – Walton says another improvement is the increased visibility into the bins, “allowing significantly more passengers to see in to check if a small item like a cell phone has fallen out of their bag”.

In addition, despite the larger size, there is no requirement for the “somewhat complex” bin assist mechanism seen on the Sky Interior’s pivot bins which helps to reduce the closing forces required. Better still, the weight saved through eliminating the mechanical system means that overall, the larger bin is “weight neutral” compared with the standard Sky model, says Walton. Added to that is the fact that the overall look and feel of the Space Bins is no different, allowing airlines to achieve a uniform appearance across their fleet. “A passenger won’t notice the difference [in appearance] between the two,” says Walton.

The new bins will be manufactured by Boeing’s Interiors Responsibility Center, located in Everett, Washington, with installation taking place at its 737 final assembly line in nearby Renton. However, initial slots on the Renton line are limited for the Space Bins, due to the relatively high amount of change incorporation work required to install them at present.

However, as installations become more numerous across the fleets of launch customers Alaska and Delta Air Lines, Walton says that an increasing number of spaces on the line will naturally become available.

“As we implement these with more customers, the significant amount of design effort reduces so we’d be able to incorporate that more easily,” he says.

That said, all Alaska’s future 737 deliveries, including of the in-development 737 Max, will be outfitted with the Space Bins. Certification is anticipated shortly before first delivery later this year, with Boeing currently engaged in structural testing of the compartments.

Although Walton does not reveal Boeing’s sales target on the bins, he says that a “positive reaction from the flying public” will be the biggest single factor in driving their uptake.

Also on show at its Aircraft Interiors stand is a set of new cabin dividers developed to complement the new bins. Although not a significant change, it is nonetheless a sign that the airframer is considering the overall look and feel of the cabin as part of the development.

At this point in 2014, Boeing had just opened its 737 Configuration Studio, a facility designed to aid airlines in better tailoring the interiors of their new narrowbodies. It does this through allowing customers to see real-life examples of seats, galleys and other interior fittings in context.

Located a short distance from its single-aisle final assembly line, the centre has now seen more than 5,000 visitors from over 50 airlines pass through its doors.

“It’s been very well received by our customers as well as internal Boeing employees,” says Walton. “Customers really appreciate the ability to see the parts [in real-life] rather than just seeing them in a catalogue.”

In addition, he says, its location away from the more industrial setting of the main production site has helped to create a better working environment.

“When you visited Boeing before, you came to a standard office building, and to be off site in a welcoming facility allowed our teams and airlines to really collaborate on interior configuration.”

And given the weight they are putting behind them, inevitably Boeing has installed a set of the Space Bins at the studio “to really give airlines and customers an idea of the space they offer”.