Irkut anticipates closing a follow-on order for its Yak-130 with the Russian defence ministry over the next 12 months, as it targets a 40% share of the global market for advanced jet trainers.

Speaking to Flightglobal in Moscow, Irkut president Oleg Demchenko said the Russian air force has so far received 35 examples of the combat trainer from its order for 55 of the type. Deliveries from the first tranche will run until 2015, but Demchenko says a second batch totalling "not less than 60" aircraft for delivery in 2016-2020 should be signed for next year.

In the meantime, the airframer is also building Yak-130s for the export market. Algeria already has 16 of the Ivchenko-Progress AI-222-powered aircraft in operation, while Belarus has a fleet of six. However, Demchenko says the latter’s eventual requirement will rise to a total of 15-20 aircraft. 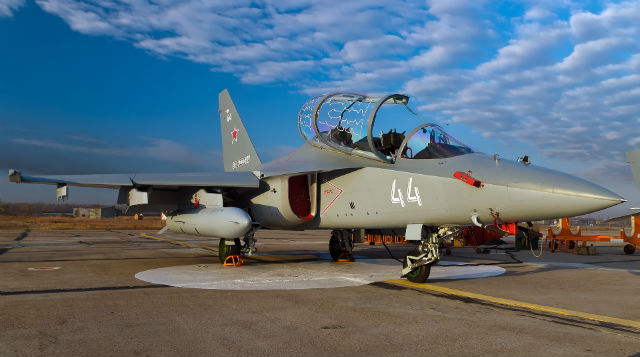 Bangladesh has also ordered 24 Yak-130s, with deliveries due to commence in 2015.

Syria too has committed to the combat trainer, but so far no aircraft have been handed over due to international pressure surrounding the ongoing civil war in the country. Demchenko says Irkut plans to eventually fulfill the contract, but that "it depends on our government and the decision they come to”.

With Mongolia and Vietnam also rumoured to be lining up orders for the Yak-130, Demchenko is confident the airframer can secure at least a 40% share of the global market for advanced jet trainers, noting that this is a "very modest projection".

Meanwhile, the company is continuing development work on a new turboprop-powered basic trainer designated the Yak-152, having won a tender with its home government earlier this year.

Initially to fulfill a demand for the Russian air force of around 200 units, Demchenko estimates a total global market – including non-military customers – of around 1,000 aircraft.

First flight is expected in 2015, with initial deliveries to follow in 2016.