The Italian air force has taken a step towards modernising its basic trainer fleet, with Leonardo receiving a contract to produce an initial five Aermacchi M-345s.

Announced on 13 January, the M-345 deal was signed with the Italian defence ministry’s National Armaments Directorate, along with a separate one linked to starting work on the country’s next-generation attack helicopter. Together, these are worth more than €500 million ($530 million), Leonardo says.

Leonardo conducted the first flight of a prototype M-345 last month from its Venegono production facility. The type is powered by a single Williams International FJ44-4M-34 turbofan with a maximum thrust rating of 3,450lb (15kN). 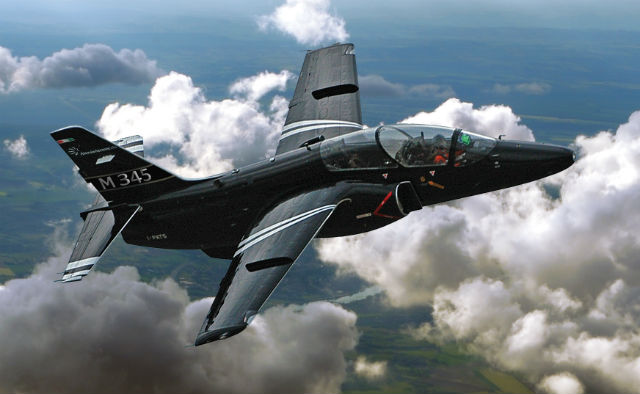 Current plans call for the Italian air force to acquire 45 of the new model to begin replacing its MB-339 fleet. To be designated the T-345 in its service, the basic trainer will be employed before student pilots progress on to the twin-engined T-346A. Flight Fleets Analyzer records Italy as having six T-346As in use, with another 12 on order.

Leonardo says the T-345 will provide a “significant boost in the effectiveness of training, improved efficiency and a reduction in operational costs” once operational. Its ongoing flight-test activity is expected to conclude later this year, with deliveries to begin by 2019.