Jordan is to modify one of its Airbus Defence & Space-produced C295 medium transports as a gunship, with the adapted platform to join two recently-delivered AC235s in air force service.

Airbus on 17 June announced it is to work on the programme with Jordan’s King Abdullah II Design and Development Bureau and US contractor ATK, which were responsible for the conversion of a pair of CN235s handed over to Jordan earlier this year. The European airframer provided technical support during the previous project. 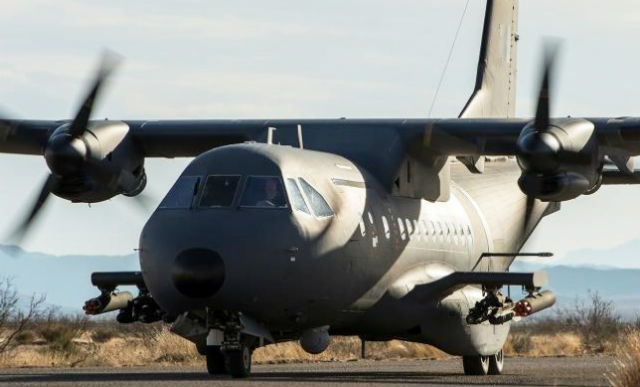 “A C295 operated by the Royal Jordanian Air Force will be converted to [a] gunship by ATK,” Airbus says. The service has two of the medium transports in service, with Flightglobal’s Ascend Online database recording these as having been built in 2003.

Plans call for the larger model to be equipped with onboard mission and fire control systems, an electro-optical/infrared sensor, a synthetic aperture radar payload and a defensive aids system for self-protection. Armaments will include an ATK-supplied 30mm sideways-firing chain gun, Lockheed Martin AGM-114 Hellfire air-to-surface missiles and 70mm guided rockets. BAE Systems was recently selected to supply its Advanced Precision Kill Weapon System to meet the latter requirement for the AC235.

Antonio Rodríguez Barberán, head of commercial at Airbus’s Military Aircraft unit – who earlier this month said a customer announcement was expected “soon” – describes the future C295 gunship as “a cost-effective and powerful addition to the Jordan armed forces”.