Malaysia plans to receive its first Airbus Military A400M transport aircraft in January 2015, with its remaining three examples to be delivered by 2016.

Daud made the comments at a ceremony welcoming the A400M "Grizzly 4" airlifter to Kuala Lumpur's Subang air base as part of its debut tour in Asia. 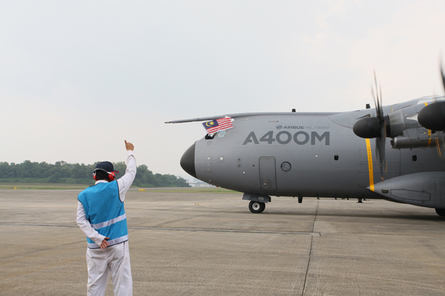 "I have had the pleasure of showing the chief of the RMAF the A400M simulator in France last year and now I look forward to showing him, and his RMAF personnel, the real aircraft flying here in Malaysia," Airbus Military chief test pilot Ed Strongman said in a statement released by the European airframer.

"We have done a lot of work since his last visit to Toulouse and have now completed all the flight test work for the issue of the initial Type Certificate," says Strongman.

After performing demonstration flights for representatives and for regional air forces and other VIPs in Kuala Lumpur, the aircraft will travel to Halim air base in Jakarta, Indonesia, and to the Thai cities of Chiang Mai and Bangkok. It will return to Europe on 20 April.

The A400M's Malaysia debut is timed to coincide with the Defence Services Asia tradeshow in Kuala Lumpur.