MEBAA: After 10 years, association celebrates successes and acknowledges battles still to be fought

The Middle East Business Aviation Association – the organisation behind the MEBAA show – is celebrating its 10th anniversary. They have notched up a number of successes, but still face a string of challenges, from an inconsistent regulatory environment to a customer base still largely resistant to mid-size business aircraft. In addition, regional instability has stunted or destroyed any burgeoning market in countries such as Egypt, Libya, Syria, Tunisia and Yemen.

“We have a lot of work ahead of us,” admits MEBAA founder and chief executive Ali Alnaqbi, as he assesses a report card that includes several positives as well as as-yet-unfulfilled objectives. On the plus side, Dubai-based MEBAA now has 250 members representing all the region’s major players, as well as manufacturers and other suppliers. Along with the successful biennial event in Dubai, they have launched regional events, including MEBAA Morocco, held in Casablanca last year.

Other triumphs include new regulations governing business aviation in Jordan, Morocco, Saudi Arabia and the UAE. “Ten years ago countries such as Morocco did not even have separate regulations,” notes Alnaqbi. Seven years from the global crash and six years since the so-called Arab Spring sparked a series of ugly civil conflicts across the region – something Alnaqbi describes as “sitting on a volcano” – business aviation has continued to grow in the Middle East, he says.

“We have made sure that, despite everything, they don’t forget about us,” says Alnaqbi of his efforts to convince lawmakers and regulators to consider the needs of business aviation when they come up with rules to govern use of the skies. “When I look at the circumstances around us, I can say that we have managed, that we never stopped,” he says. “I am happy, but of course I wish we could have done more.” 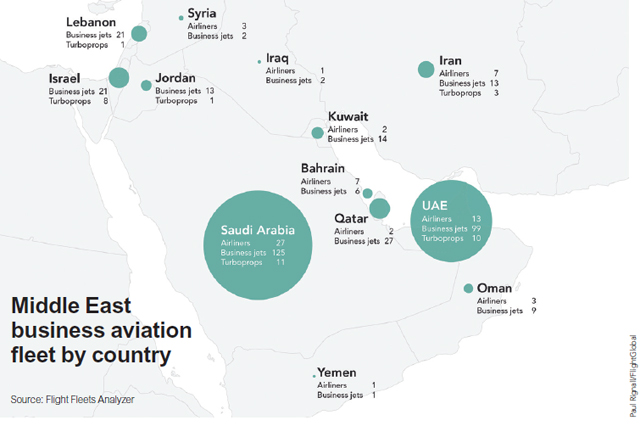 Another victory for MEBAA has been raising awareness of the dangers of the grey market, where private owners allow their aircraft to be used by third parties, often for payment in kind rather than a fee. “The grey market has not gone away,” says Alnaqbi. “But in Abu Dhabi we have worked closely with the government to tackle it. Jordan has also taken a very tough approach. I don’t think you can eliminate it, but it’s certainly reduced, and brokerages dealing in this area have disappeared.”

The show with which MEBAA shares its name may not match the USA’s NBAA BACE or Europe’s EBACE when it comes to numbers or their ability to make the news headlines, but Alnaqbi says it remains an intimate show where delegates come to do business. “People tell us that they come to the show to meet others. It is not a show where products are launched perhaps, but plenty of deals do happen behind closed doors.”

Two of the biggest issues hindering the growth of business aviation in the region, says Alnaqbi, are lack of access and a fleet that is still skewed to larger, longer-range aircraft. For a region so large, getting from A to B by air still remains difficult. Other than the biggest cities, there are few airports in the Middle East and North Africa and even fewer that cater for business travel in terms of fixed-base operations and other ground infrastructure.

While the business aviation fleet in the region has expanded considerably from when it was restricted to a handful of “flying palaces” for the ruling families and other ultra-high-net-worths, Alnaqbi longs for a day when operators compete to carry lower-ranking business people and professionals to appointments in smaller, on-demand charter aircraft, much as they do in North America and Europe.

“We have a luxury element and we are proud of it,” says Alnaqbi. “But we don’t necessarily have the right aircraft when the executive needs to go from Dubai to a meeting in Bahrain or Doha. We don’t have that flexibility. An important segment of business aviation is missing. Today these people go on airlines. But business aircraft can go where the airlines cannot and at times convenient to the customer.”