The Australian Maritime Safety Authority (AMSA) says that five aircraft will be deployed in today’s search of the Indian Ocean for the missing Malaysian Airlines 777-200ER.

“Due to the distance to and from the search area, the aircraft involved have an endurance of approximately 2 hours of search time,” AMSA says in a daily update about the mission.

Imagery provided by AMSA shows the search area is 2,300km southwest of Perth. 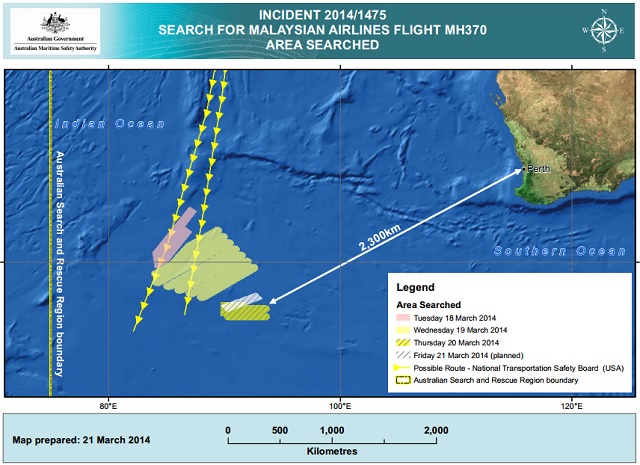 Two merchant ships are also in the search area looking for possible debris related to flight MH370, which disappeared under mysterious circumstances while operating the Kuala Lumpur-Beijing flight on Saturday 8 March.

AMSA also provided a revised map of the search area, based on the supposed locations of two large, unidentified objects that it says satellites spotted on 16 March. In a 20 March press conference, Malaysian acting tranpsort minister Hussein Hishmuddin said the two objects “were credible leads.”

Hishammuddin said that 18 ships and 29 aircraft are deployed along the northern and southern arcs identified by the search teams as potential locations of the missing aircraft. Most of the aircraft have been directed south, to the overwater region, as countries in the northern search zone use their own internal capabilities – such as China, which has satellite access – to assist the effort.