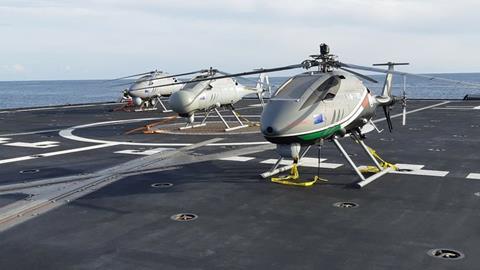 “This programme will acquire maritime unmanned intelligence, surveillance, reconnaissance and targeting aircraft systems which will complement current sensors and systems on [the] navy’s ships, while boosting a ship’s area of surveillance,” she says.

“Today’s milestone is a result of the Morrison government’s unprecedented A$270 billion [$205 billion] investment in defence capability over the next decade, which is equipping the Australian Defence Force with world-class, cutting edge capability.”

“This process will allow Australian businesses to be directly involved in providing greater situational awareness for the fleet, in particular the new Arafura offshore patrol vessels [OPVs], while strengthening long-term job growth and security.”

According to an earlier report in the Australian Defence Business Review, the shortlist was delayed from December 2020 to March 2021 owing to the unexpected number of innovative submissions that were put forward for the requirement.

The Arafura-class OPV is a small warship that will displace 1,640t. Australia is obtaining 14, with four examples under construction. The type features a large helipad on its stern. Service entry is expected in 2022.