The contract was awarded by the US Department of Defense’s Joint Artificial Intelligence Center (JAIC), and is aimed at enhancing the autonomous sensing capabilities of unmanned aircraft, says General Atomics. 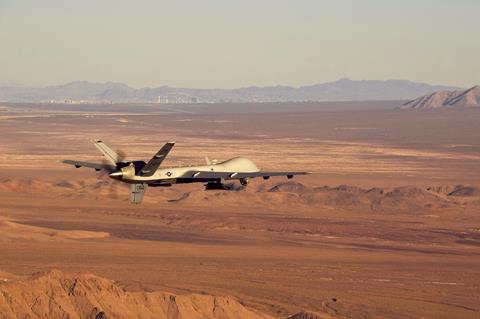 It falls under the JAIC’s Smart Sensor project, which is designed to demonstrate object recognition algorithms using unmanned aircraft, and employing AI to control an aircraft’s sensors and direct autonomous flight.

“GA-ASI is excited to leverage the considerable investment we have made to advance the JAIC’s autonomous sensing objective,” says vice-president of strategic development J R Reid.

“This will bring a tremendous increase in unmanned systems capabilities for applications across the full-range of military operations.”

According to the company, it “will deploy the technology on the MQ-9 Reaper remotely piloted aircraft configured with multiple sensors, including GA-ASI’s Reaper Defense Electronic Support System and Lynx synthetic aperture radar”.

“GA-ASI’s Metis product will be used to command the MQ-9. Metis is an intelligence, surveillance and reconnaissance tasking and intelligence-sharing application that enables operators to specify effects-based mission objectives and receive automatic notification of actionable intelligence,” the company adds.