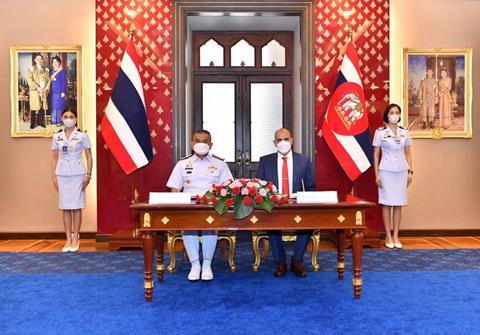 The agreement was signed at the navy’s headquarters in Bangkok by its commander, Admiral Somprasong Nilsamai. Elbit business development manager Nissim Assaf Cohen represented Elbit at the signing.

The UAVs will serve in the maritime mission, providing surveillance of Thai territory as well as the country’s sea-lines of communication. In a conflict, they will identify targets at long ranges and relay the information back to Thai forces.

The UAVs will also have a law enforcement role, and support disaster relief missions.

The Thai navy notes that over 10 countries have obtained the Hermes 900, including Southeast Asian neighbours the Philippines and Singapore.

According to Elbit, the Hermes 900 can perform a range of missions even in adverse weather conditions. Payloads can include electro-optical/infrared sensors, radars, and communications equipment.