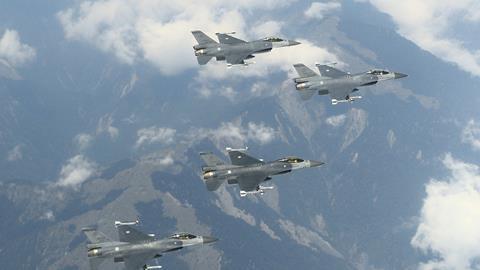 US and allies could lose 900 aircraft in conflict with China over Taiwan: CSIS

The USA can keep China out of Taiwan, but the cost of doing so will be on a scale not seen since the Second World War.

That is the assessment made by analysts at the Center for Strategic and International Studies (CSIS) in Washington DC. A team there has been conducting a series of wargames meant to simulate various scenarios of a Chinese incursion across the Taiwan Strait, sometime around the year 2026. 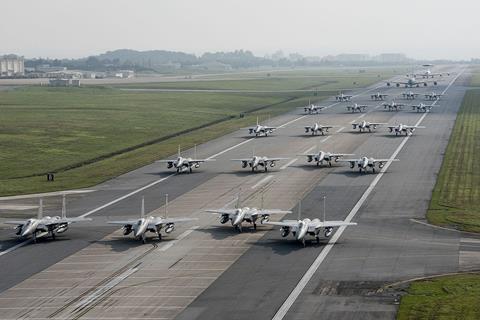 US Air Force aircraft at Kadena air base on the Japanese island of Okinawa. The facility is predicted to be critical in supporting a US-led defence of Taiwan, but is also projected to take significant damage

While analysis and final conclusions are not expected until later this year, the initial findings indicate that the USA and allies have the forces and armaments to keep China from fully occupying Taiwan, but with the loss of many lives and aircraft.

“In all except the most pessimistic scenarios, the United States and Taiwan can succeed in maintaining an autonomous Taiwan and preventing the Chinese from occupying the island,” says Mark Cancian, a former US Marine Corps (USMC) colonel and leader of the CSIS team that designed the wargame.

“However, this comes at a high cost, even in the most probable scenarios, and the cost gets higher in the pessimistic scenarios,” Cancian adds.

Exactly how high a cost depends upon what is happening elsewhere in the world when a Chinese operation is launched and how US-led defenders respond.

These various scenarios, as Cancian calls them, incorporate variables like whether or not US troops are on Taiwan when the invasion begins, the presence of another crisis elsewhere in the world that requires US attention or even how quickly decision makers in Washington commit forces to Taiwan.

What the team assessed as the most-probable set of parameters, which Cancian calls the “base case”, assumes that the USA will not have significant forces on the island when a Chinese operation commences. Cancian says this was based on observations such as Beijing’s extreme reaction to US House Speaker Nancy Pelosi’s recent diplomatic visit to Taiwan, which suggest basing troops on the island ahead of time would not be politically tenable.

In such a scenario, China enjoys a first-mover advantage, while the Pentagon must “flow” troops and equipment into the western Pacific, many from bases thousands of miles away in North America.

Cancian notes that most of those loses will be concentrated in ground-based aircraft belonging to the USAF and allied air forces. However, he adds that US Navy (USN) carrier-based air wings will also be highly vulnerable.

“In most iterations, both forward-deployed [aircraft] carriers are put out of action in the first week,” he explains. That could mean the sinking of a vessel or just damage severe enough to preclude air operations.

However the losses could be even higher in what Cancian calls a “pessimistic scenario”, one in which the situation facing US generals and admirals is particularly challenging.

Should Washington respond with indecision following the launch of a cross-strait invasion, even for a period one or two weeks, Cancian says the defenders of Taiwan will face a significantly greater challenge and correspondingly higher losses.

“In the pessimistic cases, that’s a 700-800 aircraft loss for the United States, and 900 aircraft overall for the USA, Taiwan and Japan,” he explains.

While the loss figures appear grim, there are optimistic notes in the findings thus far. In almost every scenario, China is prevented from establishing control over the disputed island.

“The Chinese always can land, there’s no way to prevent that,” Cancian reveals. However he expounds that a coalition of US, Taiwan and Japan are almost always able contain the invaders to their beachhead landing.

“In most cases, where the United States can do that, the Chinese can’t get off the beach, they can’t occupy a large part of the island and they would eventually be driven off,” he explains.

Key to a successful defence in any of the scenarios, according to Cancian, will be the ability to inflict substantial losses on the fleet of amphibious landing ships that would be needed to ferry massive numbers of Chinese ground troops across the strait.

“Successful strategies focus on the Chinese amphibious fleet, because if that gets sunk, then they can no longer land forces on Taiwan,” he says. That should be a priority even over targeting air bases and other power projection hubs on mainland China, he adds.

With that finding in mind, Cancian says the wargame team already has two emerging insights to offer. The first insight is the importance of the Long-Range Anti-Ship Missile (LRASM), a stealthy air-launched cruise missile developed by Lockheed Martin.

Long-range bombers, like the Boeing B-52 and Boeing B-1, proved particularly effective in the CSIS wargame when armed with LRASM, Cancian notes.

With the caveat that final analysis is still ongoing, Cancian says that LRASM appears to be the most important US capability in defending against a Taiwan invasion scenario. 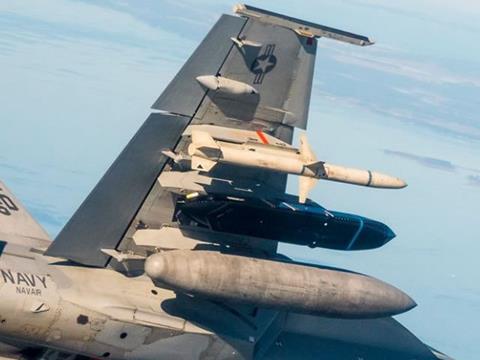 The head of Raytheon’s missile division recently warned that production of advanced precision munitions cannot be rapidly expanded when conflict breaks out and urged Western leaders to increase existing stocks.

The second insight emerging from the CSIS wargame is the need to harden forward air bases in Guam and Japan.

“Guam, Kadena air base in Okinawa and bases in Japan are very vulnerable to Chinese missile attack,” Cancian notes. “Although shelters are not perfect, hardening these bases and protecting aircraft is very important,” he adds.

Cancian notes that the heavy aircraft casualties his simulation predicts largely stem from the fact that the USA will have to quickly move large amounts of aviation assets into the combat theatre, before the allies have established maritime dominance.

This constitutes a great risk, he notes, but one that is unavoidable to save Taiwan.

“If the United States hangs back, then the Chinese establish themselves on Taiwan and win the war essentially,” Cancian says. “So US forces have to go forward so they can attack the Chinese fleet, particularly the amphibious ships, but that leaves them vulnerable to Chinese missile attacks on the air bases,” he expands.

Notably, most of the allied air losses will actually occur while aircraft are on the ground. Cancian says in various iterations of the wargame, the USA will typically lose 10 aircraft on the ground for every one it loses in the air, driving home the need for base hardening.

Some strategists have suggested using many, small airfields dispersed across the islands of the western Pacific to negate this threat. The US Marine Corps (USMC) has proposed a restructuring initiative based in part around this concept of small, dispersed teams.

Cancian, a former USMC officer himself, rejects this notion.

“It’s not a substitute for the big bases,” he says of dispersion, noting that large airfields can support far more aircraft and thus generate significantly more sorties.

“You can’t get around the need for big bases,” Cancian says emphatically.

He adds that rapidly converting civilian airfields in Japan for military use would be a more effective strategy than dispersion.

In historic terms, Cancian draws parallels between the Taiwan invasion scenario and the USA’s World War Two defence of the Philippines. That campaign, which began hours after the devastating 1941 surprise air raid on Pearl Harbor, Hawaii, resulted in the near total destruction or capture of US forces in the archipelago.

Just as in that conflict, Cancian says military and political leaders will need to prepare themselves and the broader population for upsetting levels of casualties, particularly in the USAF, should war breakout in the Taiwan Strait.

“The example I use is: later arriving [USAF] reinforcements to Kadena will land on a runway that has literally hundreds of wrecked aeroplanes, bulldozed to the side,” Cancian says, of one likely scenario.

“Those reinforcements will be told: ‘Welcome to Kadena. Tomorrow, you fly over Taiwan to take on the air forces that have done this destruction.’”