Lufthansa Technik and GE Aviation will “freeze operations” at their engine overhaul joint venture XEOS just over two years after the purpose-built facility in Poland inducted its first powerplant.

The two shareholders say in a joint statement that the sharp reduction in widebody flights during the pandemic is the main driver for the suspension of activity. 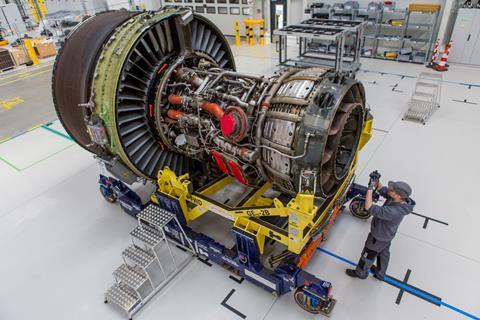 XEOS specialises in the support of GE Aviation GEnx-2B engines – the sole powerplant available on the Boeing 747-8 – and was established to also service GE9X engines for the under-development 777X in the future.

Delays to the 777X programme and “longer time on-wing” for GEnx-2Bs have been additional factors in the decision, GE Aviation and LHT say.

Cirium fleets data shows that 122 out of the 144 747-8s built are in service. A large majority of that fleet is comprised of freighters – 95 in-service and two stored units – while the passenger fleet consists of 20 in-service and 16 stored aircraft. The rest of the 747-8 fleet are private aircraft, plus two units designated to serve as future Air Force One presidential transports for the US government.

LHT and GE Aviation – which hold 51% and 49% of XEOS, respectively – say that operations at the facility will be suspended by the first quarter of 2022 and affect all the site’s 220 employees.

The shareholders say that they will “continue evaluating future opportunities to extend the partnership” for the site. “Details for a potential reopening are subject to further agreements among the shareholders and will depend on timing of the market recovery,” they say.

GE Aviation general manager of overhaul facilities Maria Deacon and LHT head of engine services Dietmar Focke jointly state: “We deeply regret this development. The highly motivated and highly skilled XEOS staff has done an excellent job over the past four years to build one of the most modern engine shops worldwide. The significantly lower number of flights in the widebody aircraft segment in the past months which will lead to reduce customer demand for shop visits on these engine lines have caused us to make the difficult decision to freeze the activities of the operation.”

Located in Sroda Slaska near Wroclaw, XEOS inducted its first engine in April 2019 and was formally opened in September that year.

The facility was scheduled to become fully operational in 2023, with capacity to repair more than 200 engines per year. LHT said in 2019 that it had a plan to “ultimately” employ about 600 people at the site.