The site in Ludwigsfelde, near the German capital’s Brandenburg airport, has so far been focused on smaller aero engines and industrial gas turbines. It is used to service Pratt & Whitney PT6A, PW200, PW300, PW500 and GE Aviation CF34 series engines, MTU’s website indicates 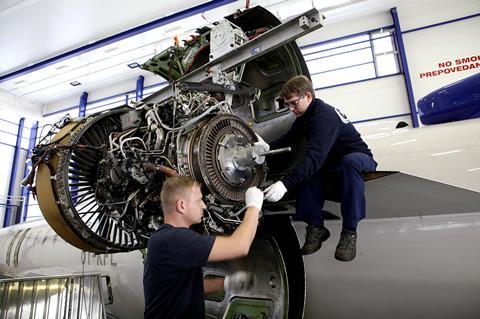 Boeing 737NG-powering CFM56-7Bs are meanwhile serviced in Hannover and at the Zhuhai shop that MTU jointly owns with China Southern Airlines’ parent.

MTU senior vice-president MRO programmes Martin Friis-Petersen tells Cirium that CFM56-7B services are scheduled to begin at the Berlin facility around the middle of this year. He says the expansion amid the pandemic shows the company’s confidence in a recovery and in the post-Covid MRO prospects for narrowbody engines.

Despite the crisis, MTU is continuing an expansion of its Zhuhai facility – which includes construction of a new, dedicated PW1000G overhaul shop near the existing site – and establishment of a component repair shop outside Serbian capital Belgrade, he notes.

The Munich-headquartered engine subassembly and MRO provider expects synergies from overhauling CFM56-7Bs and CF34s at the same site, as the latest CF34 variants share technology with the 737NG powerplant.

MTU says the additional CFM56-7B overhaul line increases network flexibility and reactivity – something the company sees as “extremely important” in the current environment.