The intricacies of managing aircraft storage

The continued high proportion of parked aircraft as a result of the global pandemic creates a range of issues for airlines and maintenance providers to ensure these aircraft remain airworthy and ready for a return to service.

“We are doing something we normally don’t want to do,” says Lufthansa Technik senior director of aircraft modification Henning Jochmann of the company’s efforts to maintain a huge fleet of aircraft in working order after their deactivation amid the pandemic.

“We’re keeping aircraft on the ground, while we normally do everything that they can regularly fly. That is a slightly different way of thinking.”

When airlines parked aircraft en masse in March and April 2020, amid the first Covid-19 wave, LHT quickly received an “immense” number of enquiries from airlines and lessors on how to manage the process of storing aircraft, Jochmann tells Cirium. 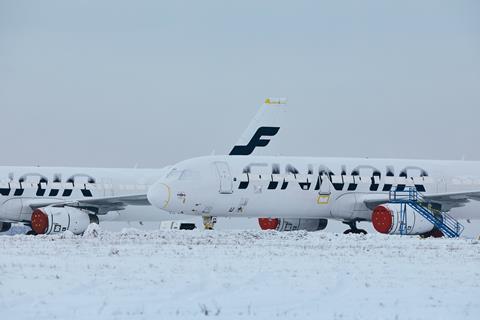 The MRO provider had short-term parking and long-term storage procedures in place because it was regularly handling around 100 temporary aircraft deactivations per annum, following lease terminations or airline bankruptcies. But the scale of aircraft groundings due to Covid was something else. Jochmann says it was difficult to quickly respond to all the enquiries.

He describes the process of parking aircraft for short periods, say a month, as a simple task: “You don’t need to do a lot.” Provided the weather conditions are not extreme, aircraft can be stored in most locations. Landing-gear wells and other openings will be sealed to prevent bird-nesting, sensors covered for protection, routine checks regularly conducted – as would be required for in-service aircraft.

But Jochmann says: “The longer I keep an aircraft on the ground, no matter whether it is a short- or long-haul aircraft, the more I need to do.”

For long-term storage, fuel, oil, water and hydraulic fluid systems will be drained and, where necessary, replaced with conservation liquids. Windows, doors and other openings will be sealed to prevent water ingress and sunlight damage. Once the aircraft is prepared for long-term storage, it does not require regular maintenance anymore.

But noting the effort and the depth of system preparation required to place aircraft in deep storage and return them to service later on – up to two weeks is necessary to reactivate long-haul aircraft – Jochmann says airlines and lessors need to think carefully what storage programme is appropriate for their individual assets. “You’ve got to have to a plan,” he says.

Air France tells Cirium that all of its aircraft types have been affected by storage measures except for the newest ones, the Boeing 787 and Airbus A350, which have primarily been kept in operation. The airline has employed a mix of long- and short-term storage “to maintain our flexibility and our ability to adjust our fleet to our flight schedule”, it says, noting that aircraft in short-term storage can be “de-stored easily” if demand increases.

In addition to favouring aircraft and engines with as much available service life as possible before the next heavy maintenance check or engine shop visit, Air France says that cabin-interior standards were also a consideration for selecting aircraft for operation, as the airline sought to “offer best services to our customers”.

Air France has established a dedicated process involving network and maintenance planners, and adapted its organisation, to optimise its in-service aircraft and fleet storage activities, it says.

Cirium fleets data shows that out of 300 mainline or regional aircraft in Air France’s fleet, 91 were listed as being in storage on 21 January.

Finnair, meanwhile, tells Cirium that it is keeping about half of its 84-strong fleet in “operative readiness to fly” while the rest are parked or in long-term storage. “We keep our fleet in such condition that we will be flexible and fast in increasing our capacity, after the travel restrictions are lifted and the demand starts to recover,” the carrier says.

Out of 84 aircraft in the combined fleet of Finnair and partner Nordic Regional Airlines – 60 mainline and 24 regional aircraft – 35 were listed as being in storage on 21 January, Cirium fleets data shows. All of the stored assets are mainline aircraft, including 28 of the carrier’s 36 A320-family jets.

Reduced travel demand has prompted the carrier to switch flights previously operated by A320-family jets to Embraer E-Jets and ATR turboprops. One of Finnair’s A319s was retired in late 2020 to be parted out.

Among the aircraft placed in storage are four A330s that were ferried to Tarbes in southern France to prevent corrosion. Finnair indicates that it is currently deploying its A330s for cargo flights only, while passenger long-haul services are being operated with A350s. One some of the A330s, seats have been removed to increase cargo capacity.

In-service aircraft are being rotated in order to keep as many as possible available for operation, Finnair says. It acknowledges that asset utilisation is lower than before the crisis.

Noting the unprecedented scale of sustained fleet inactivity amid the pandemic, the Oneworld carrier says that managing its fleet has been “very much a learning process”.

“There is something new every day that we learn about the parking/storage procedure, and [we] develop it further,” says Finnair, adding: “Our experience is that the whole industry has been extremely flexible in supporting the operators during this time.”

Aircraft manufacturers give instructions on how to place and maintain aircraft in storage. Jochmann says OEM instructions must be followed for primary structures and systems to comply with regulatory requirements and ensure an aircraft’s future serviceability, but secondary items, for example cabin installations, may be handled more individually to optimise in-storage maintenance, especially as interior equipment varies across operators.

“We are in a position to develop individual, customised solutions, while OEMs have a very broad approach – something they need to have because their documents need to cover all aircraft that have ever been built.”

Noting the need to present back-to-birth equipment documentation to recertificate aircraft, he says the required paperwork may be impossible to complete for some aircraft and could therefore result in a write-off.

If maintenance-check intervals have been exceeded during periods of inactivity, operators may have an option to obtain a single-flight permit to ferry an aircraft from a storage location to an MRO facility to complete the required work.

“That’s why it is so important that an aircraft is under good care during a parking period and that you don’t find two or three no-go items that prevent a flight,” says Jochmann. “If you start to, in the worst case, change engines at a remote airfield, it will not only be expensive, but take time and become very complicated.”

If an operator is certain that a stored aircraft will not return to service, the most obvious solution would be to retire it and retrieve its residual value through part-out. But that decision may not be simple as it depends on the aircraft’s ownership, financing circumstances, who can decide about a decommissioning, and – perhaps the most difficult consideration overall today – market prospects.

Jochmann notes the large number of in-storage A380s amid the pandemic and the stated intention of several operators not to return them to service in a post-Covid world – Air France became the first to prematurely retire all of its remaining A380s in 2020 – but says most of the airlines in question have not yet decided the fate of these aircraft. “At the moment, we don’t yet see airlines sending relatively young aircraft to be [parted out].”

Instead, he says, carriers take the comparatively costly option of storing aircraft because they are “insecure what will happen”.

Jochmann acknowledges that LHT cannot advise airlines as to how air travel will develop over the next years. “We are having a hard time with that ourselves,” he says. But he argues the MRO group can provide operators with flexibility by extending services when required or guaranteeing that aircraft can be returned to service within an agreed time when capacity is needed.

LHT does foresee bottlenecks if many deactivated aircraft were to be returned to service in a short period of time. “Depending on how many aircraft are in storage, there may be maintenance hold-ups because every aircraft will require some work,” Jochmann says.

Air France, recalling the sharp but short-lived uptick in European airline activity in July-August, likewise foresees a challenge “for the aeronautical industry as a whole” in quickly absorbing reactivation of many aircraft.

When travel demand does pick up, the number of active aircraft will likely grow at a slower rate as operators may initially replace smaller aircraft with larger types and increase utilisation before additional equipment are brought into service.

LHT therefore predicts that aircraft reactivation efforts will be more gradual than the sharp fall in airline activity when huge swathes of aircraft were grounded in March and April 2020.

Even though travel demand remains low and airlines have further reduced capacity amid high infection rates and increased government restrictions, Jochmann expects that carriers will study and prepare the reactivation of stored aircraft before demand comes back, to avoid bottlenecks when the equipment is required.

In any case, he says, LHT’s parking/storage support does not generate substantial revenue to offset the company’s losses amid the crisis. “It’s more or less a service to the customer, where we try to maintain trust through competence during a very difficult time,” says Jochmann. “These are not high-price services. We would rather do any D-check.”