Air Europa to reinstate 87% of long-haul routes in July

Air Europa will restore the majority of its US and Latin American services next month, when it will operate 87% of its pre-pandemic long-haul routes.

The Spanish carrier says it will have reinstated 20 of its 23 US and Latin American routes by July. 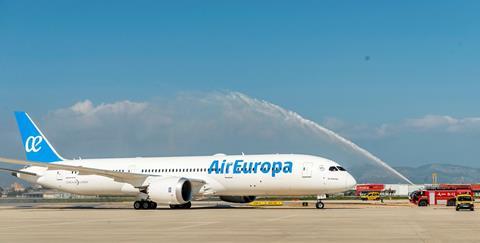 It will relaunch flights from Madrid to Miami on 12 June and will add New York the next day. The move follows a relaxation in travel restrictions to a number of countries including Spain by the US State department, and Spain’s decision to allow vaccinated travellers to enter the country.

On 20 July, Air Europa will restore flights to Panama and Salvador de Bahia in Brazil using Boeing 787 aircraft. Other Latin American services to be restored include Bogota, Buenos Aires, Cancun, Lima and Quito.

The airline says it will also add new frequencies on its European routes, gradually and in line with growing demand.