The Star Alliance carrier will operate thrice-weekly flights from Auckland to New York’s John F. Kennedy International airport starting 17 September. It will use Boeing 787-9s on the route. 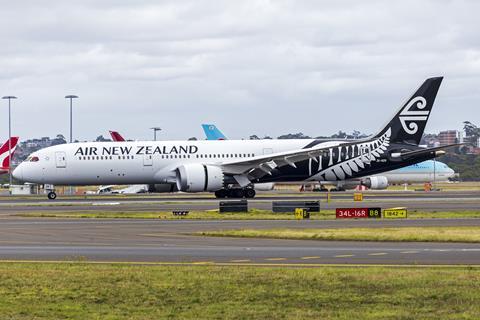 Air New Zealand will operate the Boeing 787-9 on the New York nonstop.

At 16h northbound and nearly 17.5h on the southbound leg, the Auckland-New York flights are among the world’s longest nonstop routes.

The decision to launch New York flights comes as New Zealand reopens it borders to visa-waiver countries – which the USA is part of – from 1 May.

Airline chief Greg Foran says: “The US has always been a key market for us, and this new route cements our commitment to developing growing tourism opportunities between the two countries.”

The airline estimates the new route will contribute an additional NZ$65 million ($45.3 million) to the local economy.

At the time, the airline made the decision to withdraw operations from London, which it had operated as a one-stop service via Los Angeles.

Since the pandemic hit, the airline postponed the New York launch to late-2021. New Zealand’s borders remained closed through 2021 and in early-2022, when the country was battling the Omicron variant.

As part of initial preparations for ultra-long-haul flying, Air New Zealand in February 2020 teased a sleep pod concept for economy class, which it said could be installed in future Auckland-New York flights.

The current announcement does not make mention of the sleep pod – known as the Economy Skynest – though Air New Zealand says it has “put a lot of thought” into the in-flight experience.