Atlanta Hartsfield-Jackson regained its pre-pandemic standing as the world’s busiest airport by passenger numbers in 2021, according to data released by ACI World today, as domestic traffic continued to be the differentiator in another Covid-hit year.

The Delta Air Lines hub is one of eight US facilities in the top 10 alongside two Chinese airports.

When only international traffic is considered, none of busiest airports in 2021 made it into the overall top 10 ranking, reflecting the outsized importance of domestic passengers in a year defined by a patchwork of border restrictions around the world.

Notably, however, Atlanta’s 2021 passenger numbers of 75.7 million would have seen it feature among the 10 busiest airports in 2019 – in 10th place – marking the first time an airport has reached that milestone during the pandemic.

The busiest airport in 2020 – Guangzhou Baiyun – dropped to eighth place in 2021, ACI World data shows, as its home country continued to pursue a ‘zero-Covid’ policy that sometimes weighed on travel demand, even domestically. Its fall was, however, largely down to the strong recovery among US airports. 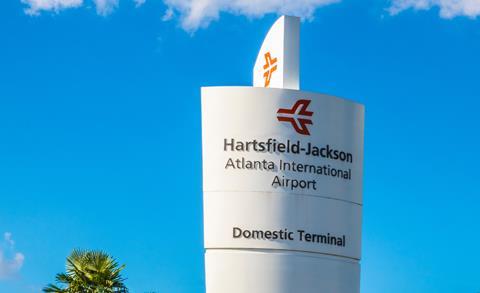 The luck of the draw in terms of the impact of Covid restrictions on passenger numbers is perhaps best reflected in Antalya and Cancun International’s inclusion among the busiest international airports – the latter having risen from 61st position in 2019. In both cases, the data reflects the relatively open nature of leisure-focused inbound markets.

While the passenger rankings reflect significant upheaval across the past two years, the cargo listing shows little change among the busiest airports by tonnes of freight handled.

Nothing better demonstrates that dichotomy than Hong Kong International’s place at the top of the cargo chart; FlightGlobal analysis shows the number of passengers handled at the hub dropped from 71.5 million in 2019 to 1.4 million in 2021.