US airlines have joined almost 50 other aviation and travel organisations, appealing to the governments of the USA and UK to open up a travel corridor between the two countries “as soon as safely possible”.

The letter to US President Joe Biden and UK Prime Minister Boris Johnson, dated 3 May, says the successful vaccination efforts in both countries so far have created “a significant opportunity for the UK and US … to re-open this crucial air corridor safely”.

The letter is signed by 48 unions, airlines, lobby groups, airports and other related aviation and tourism organisations from both countries. Signatories include Airlines for America (A4A), Virgin Atlantic, Air Line Pilots Association, International (ALPA) and London’s Heathrow and Gatwick airports – US visitors’ primary gateways into the UK. 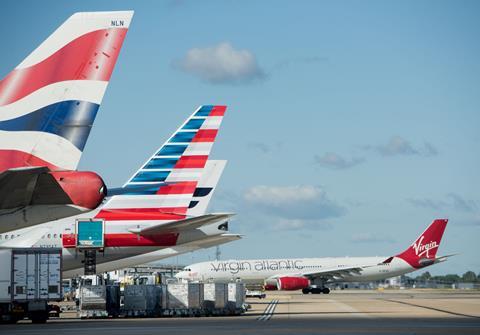 US and UK airlines, unions and travel organisations call for opening of travel corridor

“Safely reopening borders between the US and UK is essential for both countries’ economic recovery from Covid-19,” the letter reads. “Given the deep economic, social and cultural ties between our two nations, we believe your meeting ahead of the G7 in early June would be an ideal opportunity for a joint announcement of the full reopening of the US-UK air travel market for both US and UK citizens.”

The G7 group of industrialised nations holds its annual summit on 11-13 June 2021 in the UK.

Since the beginning of the pandemic more than a year ago, numerous countries around the world closed their borders to non-citizens and non-permanent residents. That led to severe job losses in the industry, and a slowdown in economic activity.

Restoring air travel, which the signatories call a ”critical enabler of trade between our countries”, as well as free movement between the two nations is essential, not just for leisure passengers looking to visit loved ones and friends, or to travel on a long-awaited vacation abroad, but also for the recovery of the more lucrative business travel segment.

“The tourism and hospitality sector has been one of the hardest hit by Covid-19 in both economies and safely restoring the US-UK air travel market will have a significant impact,” the groups write. “If travel restrictions are lifted by this June, we expect the market will start to recover and approach 70 percent of 2019 levels by the end of the year buoyed primarily by summer season traffic.”

Vaccination efforts in both countries have accelerated the return to a more normal social existence on both sides of the Atlantic. The groups say that by the end of April at least 53% of adults in the US and 62% of adults in the UK have had at least one vaccine against the highly contagious virus.

Earlier on 3 May, European Union regulators outlined plans to ease restrictions into EU states for travellers who are either fully vaccinated against the coronavirus or from countries where the pandemic has been controlled. The European Commission’s proposal reflects progress of vaccination programmes and scientific evidence of their role in breaking the transmission chain.