The carrier will operate 17 flights per week on 11 routes from Southampton between 1 May and 31 October 2021, replacing some of the capacity that the airport lost due to the collapse of Flybe in March. 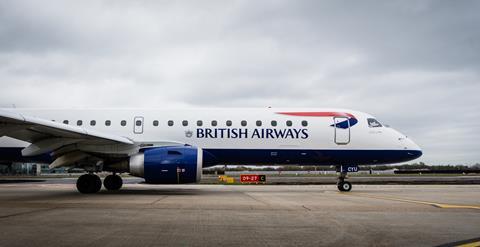 “We are delighted to announce the extension of our services to Southampton Airport next summer,” states CityFlyer’s managing director Tom Stoddart. “This is an exciting opportunity for the British Airways family. The ideal location of the airport and excellent facilities on offer will hugely benefit our customers along the south coast as they plan to take to the skies again and book a well-deserved holiday in the sun.”

Cirium data shows that the collapse of UK carrier Flybe earlier this year, in combination with the Covid crisis, had a catastrophic impact on Southampton airport’s traffic levels.

In the year up to its collapse, Flybe operated around 90% of services from Southampton, Cirium data shows.

Although several airlines have moved in to operate former Flybe routes, even at the height of the airport’s recovery on 26 September there were just 13 daily departures.

Steve Szalay, operations director at Southampton airport, describes the new routes as “fantastic news” for the facility “during what has been the most challenging of years”.

He adds: “It’s also great to see BA return to the airport once again and the range of excellent destinations on offer is sure to be a welcome early Christmas present for passengers looking to plan a European holiday next summer.”

The services will be operated using CityFlyer’s fleet of Embraer 190s.

CityFlyer’s network from London City airport will be unaffected.