The impact of the coronavirus crisis means American Airlines sometimes feels more like ”a $2-3 billion start-up company” than one of the world’s largest and longest-established operators, according Rhett Workman, the carrier’s managing director for Europe and Asia-Pacific.

”You find humour in some of what’s happening,” Workman says of that unprecedented financial transition during today’s Airlines 2050 conference, having seen the Oneworld carrier achieve revenue of around $45 billion in 2019.

He states that, in common with most operators, American is ”looking for solid ground and where you can deploy your assets most efficiently” amid an extremely challenging operating environment.

On the transatlantic, for example, American “had roughly 70-75 flights a day” last summer, but is operating “under 10” now.

At London Heathrow airport, the airline is at around 25% capacity year-on-year in combination with partner British Airways, “with most load factors below 50%”. 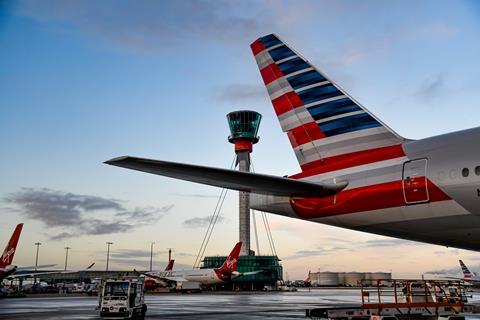 ”This is really going to test our mettle,” Workman says, calling for the industry to ”come together and really focus on testing, as that is the most immediate way forward to create some life in our business.”

A testing regime would put “people back on our planes in a safe and hygienic way through public health corridors”, he explains, echoing comments made earlier at Airlines 2050 by new BA chief executive Sean Doyle.

UK transport secretary Grant Shapps – also speaking at Airlines 2050 – provided some reassurance that coronavirus testing may soon be in place for travellers to the UK, although not the pre-flight testing that some stakeholders would prefer.

In the meantime, Workman highlights the importance of cargo flights as a lifeline not just for the carrier, but “for so many businesses connected to our industry”, citing the example of a recent transatlantic American flight that was loaded with more than 125,000lb (57,000kg) of Scottish salmon.

”The last cargo flight American Airlines had before March of this year was in 1984,” he states. “At this point we’re over 3,000 cargo-only flights this year.”