Reborn UK regional carrier Flybe has secured 86 summer-season slots at London Heathrow airport that it plans to use for services to Edinburgh and Aberdeen in Scotland.

Data published by airport slot co-ordinator ACL on 26 April shows the carrier received the slots from British Airways for the period of 28 April to 30 October. It lists the aircraft to be utilised as a De Havilland Canada Dash 8-400. 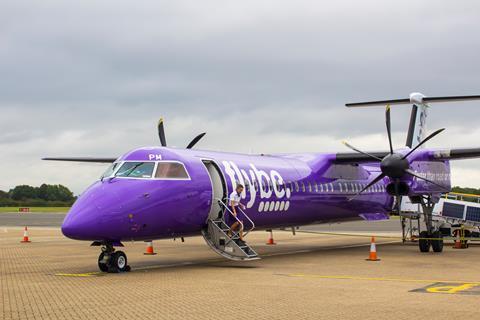 BA was required to provide the slots because of an agreement with European Commission that obliges the IAG-owned carrier to supply slots to any competitor seeking to begin services on certain routes from Heathrow, as part of its takeover of BMI in 2012.

The sale of Flybe to a company associated with Cyrus Capital completed on 13 April, allowing it to push ahead with plans to launch a new network and operations over the summer.

Previously known as Thyme Opco, the new company has been renamed Flybe Ltd.

“Subject to further success with vaccinations and relaxation of travel restrictions, we plan to launch a new and much improved Flybe sometime this summer on many of our former routes where there remains a critical need for a strong, reliable, and customer-focused airline,” it said on 15 April.

Although the initial airline will be smaller than the previous Flybe, it plans to “grow, create valuable jobs, and make significant contributions to essential regional connectivity in the UK and EU”.

The UK airline collapsed in March last year and its assets, including the company’s airport slots, were handled by administrators EY until the sale.

Prior to falling into administration, Flybe carried around 8 million passengers a year across a network of 81 airports in the UK and elsewhere in Europe, using a fleet of mainly Dash 8-400 turboprops.