Hawaii starting on 15 October will allow travellers to submit negative coronavirus test results 72 hours in advance of their flights to bypass its ongoing quarantine for new arrivals to the islands, hoping to boost tourism after months of nearly non-existent air travel.

Several carriers, including Honolulu-based Hawaiian Airlines, will sell virus tests to customers before flights, giving them the chance to resume flights to Japan and to more US mainland cities. The state first imposed its quarantine in March to deter the spread of infection from the mainland, but its economy has suffered as tourism is its dominant industry. 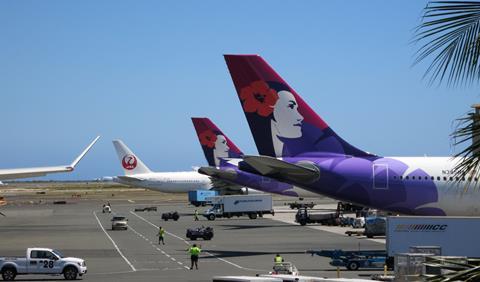 Local officials including Hawaii County mayor Harry Kim voiced concerns that one virus test on the mainland was not enough to minimise the risk of spreading coronavirus. As an extra precaution, people flying to Kona International airport and Hilo International airport will have to test negative for coronavirus a second time upon arrival, with the cost paid for by the state through CARES Act funding. A second test is not mandatory upon arrival at Hawaii’s other islands.

Travellers flying between island counties of Kauai, Hawaii, Maui and Kalawao are still required to self-isolate for 14-days, but the state has empowered these local governments to adopt a virus testing process to allow people to bypass the quarantine.

The summer months of July and August are the busiest season for travel to the island. Hawaiian spokesperson Alex da Silva tells Cirium “we have seen an uptick in bookings” with testing beginning on 15 October. Leisure travel, visiting friends and relatives travel and even the return of Hawaii residents is expected to spike now that people have a safe option to avoid self-isolating for 14 days upon arrival, da Silva says.

“We’ve been working with our partners in the hospitality sector on what is expected from tourists” to ensure that people wear masks and other precautions to minimise the risks of infection, he says.

Hawaiian on 1 November will resume service between Honolulu and Oakland, Phoenix and San Jose. With the addition of those four destinations, Hawaiian’s network by 18 November will total 10 cities on the US mainland, including Los Angeles, Portland, Seattle, Sacramento, San Diego and San Francisco.

The Honolulu-based carrier halted flights to Boston, New York City and Long Beach, California, after health officials declared coronavirus a pandemic in March, Cirium schedules data shows. These are the only three mainland cities cut from the airline’s network compared with 2019, and its capacity in November will be down 64% year-over-year for the continental USA.

There is particularly strong demand for flights between Las Vegas and Honolulu, da Silva says. Hawaiian flies three times weekly between those cities with Airbus A321neos, in part because “there are a lot of students who go to school there, and people have extended family or second homes there”.

The virus testing also means that Hawaiian will have to compete with its rivals for whatever tenuous demand increase follows. Travellers during October will have the option of flying on routes to Honolulu, Lihue, Kona and Kahului on Alaska Airlines, Delta Air Lines, United Airlines and American Airlines, Cirium schedules data shows.

Southwest Airlines has emerged as the top mainland competitor to Hawaiian, offering flights to Hilo as a fifth destination on its October network instead of the four offered by the other mainland carriers.

All of these mainland-based carriers are scheduled to increase capacity to their four or five Hawaii destinations from October to November.

American tells Cirium it also plans to use the same rapid-testing model for customers travelling to Jamaica, the Bahamas and Costa Rica. Hoping to enable a recovery of international travel, trade group IATA director general Alexandre de Juniac has called for governments to agree on common standards of pre-flight coronavirus testing.

Travel between the islands will be limited not only by the ongoing quarantine and evolving virus test procedures in these local jurisdictions, but also the temporary suspension of Hawaiian’s regional subsidiary Ohana, which will cease flights in November.

Empire Airlines operated flights on behalf of Ohana with ATR-42 and ATR-72 turboprop aircraft, serving routes between Hawaii’s capital Honolulu and Molokai island as well as Lanai on Maui. Earlier this year the airline had suspended its connection between Honolulu and Kapalua in West Maui.

Hawaiian also makes interisland flights with its fleet of 20 Boeing 717 aircraft, five of which are in storage, Cirium fleets data shows. The mainline relies on Empire because it is not certificated to fly the ATRs, Da Silva says, and is required to halt Ohana service until interisland travel demand increases.

“We have a labour clause for Hawaiian Airlines pilots that if our 717 flying between the islands drops to a certain threshold it no longer allows us to have a third-party feeder carrier contract,” he says.

Mokulele Airlines tells Cirium it is coordinating with Hawaiian to fill the void during the suspension of Ohana to ensure ongoing air bridges to Molokai and Lanai. Hawaiian touts interisland connectivity as a key part of its competition with rival carriers, and will continue flying 717s between its Honolulu hub and Hilo, Kona, Kahului and Lihue.

“While Hawaiian would be able to resume Ohana by Hawaiian service with a significant recovery in interisland travel, that is unlikely to occur anytime soon,” the mainline carrier says.

It also remains to be seen whether coronavirus testing creates enough travel demand to fill seats on routes flown by Hawaiian and the five mainland carriers.