The three US legacy passenger carriers have announced changes to their schedules after a four-month period in which capacity and demand had hit all-time lows due to the coronavirus pandemic.

United Airlines and Delta Air Lines say they are raising their capacity to between 35-40% of normal during the 2020 summer travel season. For its part, American Airlines has announced a “reset” on its international network, utilising more partners in order to increase profitability for what it expects will be a prolonged period of low demand to those long-haul destinations. 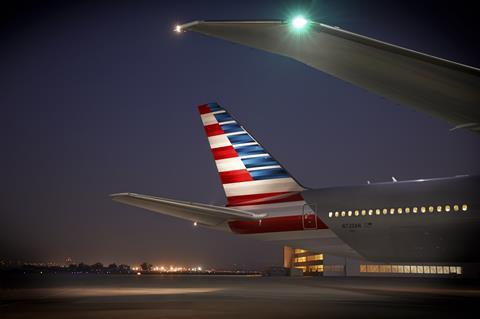 “Covid-19 has forced us to reevaluate our network,” American’s chief revenue officer Vasu Raja says. “American will have a significantly smaller international network in the year ahead, but we are using this opportunity to hit reset and create a network using the strength of our strategic hubs that we can build and grow upon and be profitable on in this new environment.”

Some flights that will be permanently axed from the schedule include three connections each from Charlotte and Philadelphia, two east coast hubs that are popular with travelers to Europe.

American will also cut several connections from Los Angeles to Asia, and will shift its major trans-pacific hub to Dallas/Fort Worth. Miami will remain the carrier’s primary hub for flights to the Caribbean and Latin America, the airline says.

Chicago-based United says on 1 July that it will add nearly 25,000 flights during the month of August, tripling its schedule size from June. The carrier says it will add 350 daily flights from its US hubs including more connections to mountain and national park destinations such as Aspen, Colorado; Bangor, Maine; Bozeman, Montana; and Jackson Hole, Wyoming.

It will be flying almost 50% of its domestic schedule in August compared to 30% in June, and resume 50 routes in August that it did not have in its July schedule, United says.

“We’re taking the same data-driven, realistic approach to growing our schedule as we did in drawing it down at the start of the pandemic,” says Ankit Gupta, United’s vice president of domestic network planning. “Demand is coming back slowly and we’re building in enough capacity to stay ahead of the number of people traveling.”

The airline also says it will return to several non-US destinations such as Tahiti, Mexico and the Caribbean, and offer more options for passengers traveling to Brussels, Frankfurt, London, Munich, Paris and Zurich.

United’s expansion comes even as the European Unionl continues to bar non-Europeans traveling from the United States for non-essential reasons due to spiking coronavirus cases in the US.

Overall, the airline says that this August it plans to fly about 40% of its schedule during the same month last year.

Delta announced on 30 June that it is reinstating more than 1,000 flights during the month of July, as demand for West Coast and Florida vacation spots increases. It will also raise capacity to Latin America and reinstate some flightsthe Asia-Pacific region as travel restrictions around the world ease.

Delta says its overall capacity in July will be about 65 percent smaller than it was during the same month last year. It has committed to blocking middle seats in economy through the end of September, and capping capacity at 60% in its main cabin and 50% in first class.