From 27 January, Malaysia will place its code on Qatar-operated services between Doha and 12 European cities. Qatar will codeshare Malaysia-operated flights between Kuala Lumpur and four cities in Malaysia and Indonesia. 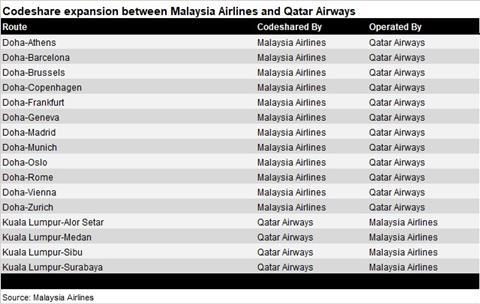 “The expansion of codeshare cooperation between Qatar Airways and Malaysia Airlines is a natural next step in the strengthening of our close partnership.”

Cirium schedules data indicate that prior to this, Malaysia has been codesharing Qatar-operated services from Doha to Kuala Lumpur and nine points in the United States, while Qatar has access to 20 routes operated by Malaysia.