Scandinavian low-cost start-up airline Norse Atlantic Airways has launched service between Fort Lauderdale-Hollywood International airport and Oslo, marking the return of a direct route between the airport in South Florida and Europe.

“Norse Atlantic Airways has now entered a new chapter, we are delivering on our promise to offer affordable value and a quality travelling experience to all,” Norse chief executive Bjorn Tore Larsen says on 20 June.

“The combination of affordable transatlantic flights offered by Norse Atlantic Airways and the return of transatlantic service to and from FLL means that passengers now have the ability to explore further for less and enjoy the convenience and choice of an efficient, quick and modern link between the United States and Norway,” he adds. 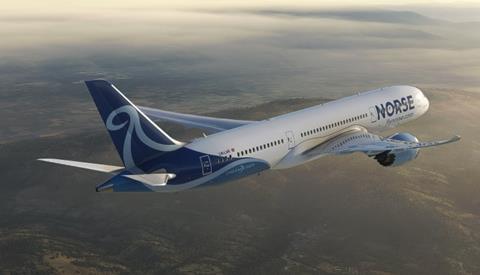 The first flight, on 20 June, was operated by a Boeing 787 Dreamliner.

Most transatlantic flights between Europe and southern Florida, a popular vacation destination for European tourists, arrive at and depart from Miami International airport, 27 miles (43km) to the south.

Norse also plans to launch flights between the UK and USA, with a London-New York route set to commence on 12 August.

The airline was founded in March 2021, shortly after budget carrier Norwegian – struggling to emerge from a restructuring process – opted to ditch its long-haul, low-cost division, which used a fleet of 787s.