Norwegian this summer served Barcelona, Malaga and Tenerife from Birmingham, and Alicante, Barcleona and Malaga from Manchester.

The Spanish flights were its only services from Birmingham. However, Norwegian will continue to connect Manchester with Olso and Stavanger in Norway, as well as Stockholm Arlanda in Sweden.

"Following a review of our services, we will cease operating flights from Birmingham to Spain with the last services departing on Saturday 28 October," says the airline.

"A natural part of our UK development will see some reductions in routes with lower passenger demand, allowing us to focus instead on providing affordable flights on strong-performing routes."

Norwegian began connecting Spain with Birmingham at the start of the summer season in 2015. It dropped its Madrid flights from the city last winter and its Gran Canaria services ahead of this year's summer season.

All three surviving routes were operated this summer by multiple carriers, including Monarch, amid heated competition in the UK-Mediterranean market.

Even with both Monarch and Norwegian coming off the Birmingham routes, and with other operators scaling back their winter operations on the seasonal routes, FlightGlobal schedules data shows that four operators will serve Tenerife, three Malaga and two Barcelona from Birmingham in November.

Monarch was the biggest operator of both Malaga and Tenerife flights. Norwegian deployed among the lowest-frequency services on the routes. 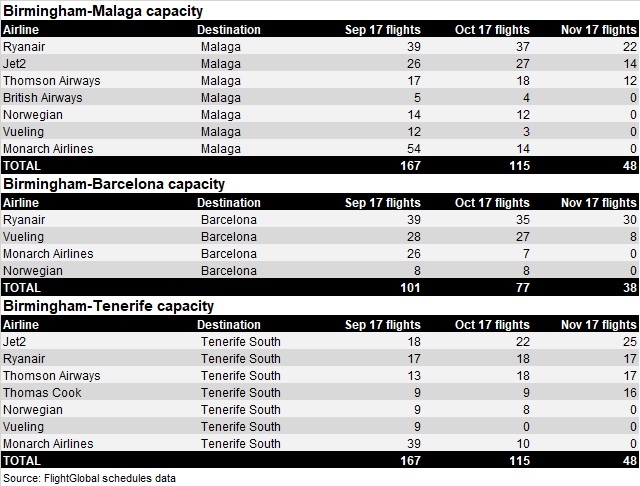 The three Spanish services from Manchester that Norwegian is dropping were also served by Monarch and had even more competitors.

FlightGlobal schedules data shows there were nine operators on Manchester-Alicante at the peak of the summer. There remain five operators serving the route in November, four serving Malaga from Manchester, and three operating on the Barcelona route.

Alongside Birmingham, Manchester, and its large London Gatwick operation, Norwegian also operates short-haul services from Edinburgh to both Scandinavian and Spanish destinations.