RwandAir and Qatar Airways have signed an interline agreement as part of a “strategic partnership”.

The tie-up will given travellers access to more than “160 destinations in the combined networks” from the carriers’ respective Kigali and Doha hubs, according to a 2 August statement.

It comes after RwandAir chief executive Yvonne Makolo said on 16 July that progress on Qatar Airways’ plan to take a 49% stake in the African carrier remained on track but had been “slowed down a bit because of the pandemic”.

It also follows news in July that the two carriers had signed an agreement on mutual recognition of loyalty schemes.

“Africa is a hugely important market for us and this latest partnership will help support the recovery of international air travel and offer unrivalled connectivity to and from a number of new African destinations,” states Qatar Airways chief executive Akbar Al Baker.

Qatar Airways’ move to acquire a stake in RwandAir was first unveiled by Al Baker in February 2020, when he cited Rwanda’s “location, the stability of the country, and the very favourable business environment that exists in that country”.

The Oneworld carrier had already agreed to take a 60% stake in Rwanda’s proposed new Kigali airport in December 2019. 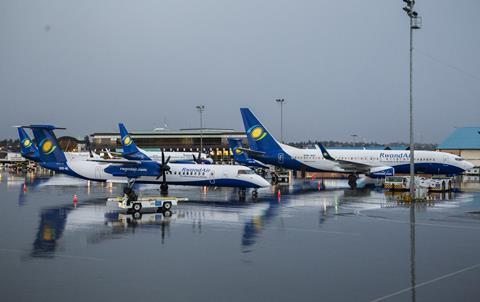 Speaking to FlightGlobal last year, Makolo said it was “an exciting time for RwandAir, especially to be working with a world-class airline like Qatar Airways”, adding: “Obviously they see a potential in not only the airline, but in the African market, and they’re willing to come in and explore that opportunity.”